I spent the darkest days of the winter dreaming of the warmer, longer days, the flowering hawthorn and me and my upside down umbrella and a big stick. It isn't quite here yet, but I have managed to find the odd branch on the cusp, to get an early fix.

Beating some earlier in the week gave up 4 or 5 of these amazing small wasps. I have to admit that I initially potted one as I thought it was a soldierfly but under the microscope I was pretty sure it was a wasp. 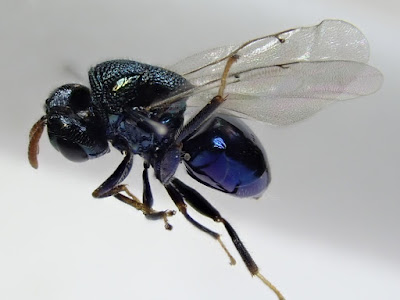 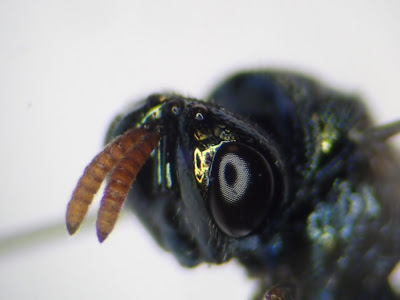 I really had no idea where to start so stuck it up on Twitter and Facebook asking for some pointers. Both quickly gave convergent answers. This is a chalcid wasp in the genus Perilampus.  I found an out of print Ent.Soc key and was pleased to find there were only five species to chose from.

These are hyperparasites, meaning that they parasitise other parasites. Some of this genus have been found on ichneumons and tachinids. Pretty fascinating stuff when you start reading about their life history.

So which species have I got?

I really can't work it out. I have eliminated one species which leaves me with 4 but beyond that I'm stuck. No confidence that I'm taking the right steps through the key. I suspect that this needs to be seen by someone who knows what they are doing!

The post title reference comes from Cranes, one of my favourite bands in the early 90s, I loved their mix of heavier guitars and ethereal voice plus I had a massive crush on the singer.