As tomorrow is looking a little iffy on the weather front, I had a day catching up with gardening chores.

Most of the day was spent mowing with occasionally pauses to pot insects that I came across.

Posted by martinf at 5:57 PM No comments:

It's always a good day when one catches a Buff-tip. It's a common moth and a I get a few each year but it always feels like it's been worthwhile running the trap when I turn an egg box over and find one of these inside.

Trapping on the whole has still been pretty quite......

Next few days not looking great either. 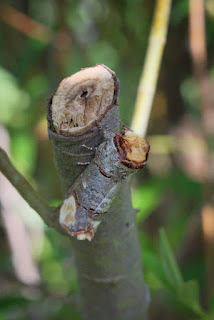 Posted by martinf at 6:10 PM No comments:

A huffin' and a puffin'

The bank holiday weekend saw a family-oriented visit back to God's own country (East Yorkshire). That's what they call it up there but parts of it are a very good argument for atheism.

Anyway, on Sunday we made a trip up to Bempton RSPB reserve to have a walk along the cliffs, see the new visitors centre and hopefully show my kids their first Puffin!

We arrived just as the rain stopped and more importantly before the hordes descended. The slopes down to the cliff were absolutely jammed with flowering Red Campion. 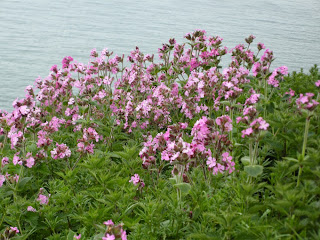 I don't remember ever seeing so much in one place. While walking I disturbed several Rivulets Perizoma affinitata, which prefer this as a foodplant (cue crap photo). This was a new species for me. Have had the smaller version in the garden but not knowingly seen this before. 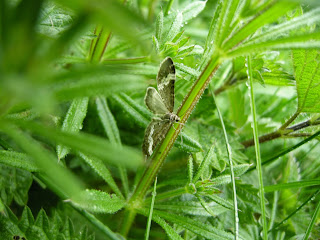 The cliffs looked magnificent. Packed with Kittiwakes, Guillemots and Gannets, a few Razorbills lined the tops. But not a Puffin in sight! 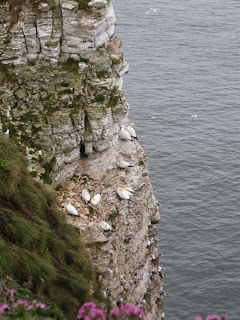 There had been a big emergence of Bibio flies. I guess St Mark's Flies but not sure if there are others possible. 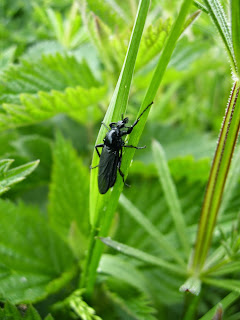 Finally on the return walk, I noticed a Puffin on the cliff top and gave the boys a look much to their relief. Although trying to direct a 4 year old with binoculars is a Herculean task of massive skill....and patience. 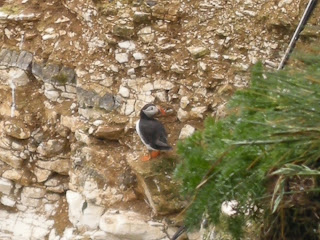 At the visitors centre we were greeted by the largest number of Tree Sparrows I've seen in some time. 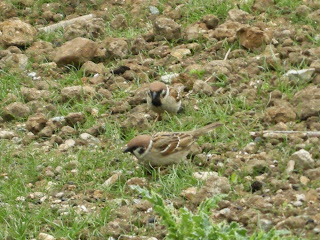 In the afternoon, a quick visit to Flamborough's North Landing resulted in a bit of guerilla-rockpooling. Highlight was a Butterfish amongst the many crabs and anemones. Main thing was the kids enjoyed it.

All in all a good day out.

Posted by martinf at 8:05 PM No comments:

While looking at hoverflies at the bottom of the garden I came across this smart looking fella. Although I guess it's a sheila!
I had a quick search online and Ancistrocerus looked like a good match. Possibly trifasciatus.
But actually does it really matter (apart from adding a biological record). It's just a stunning looking wasp. 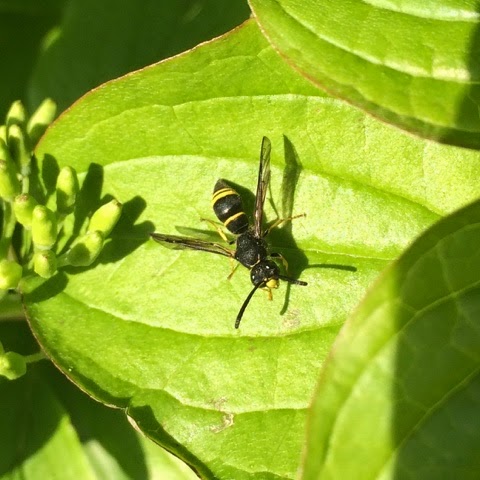 Posted by martinf at 5:15 PM No comments:

Email ThisBlogThis!Share to TwitterShare to FacebookShare to Pinterest
Labels: Wasp

A late rockabilly turn up

Last night looked good for moths, much warmer, cloud cover and the odd light shower. So I was righteously gutted when I checked the trap early doors to find three moths of three species. Fair enough two were new for the year: Pine Beauty and Yellow-barred Brindle. But hardly worth the cost of running the trap! 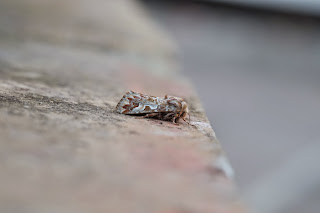 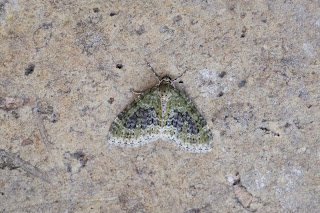 A few hours later and I'm getting ready for the weekly supermarket shop when my youngest son - he of the natural history interest - says 'Dad, look. Big moth'. and lo and behold a male Puss Moth was sat tucked out of the way on the side of the house.

A more thorough inspection of the nooks and crannies yield, a Bright-Line Brown-eye, a Swallow Prominent, a Pale Mottled Willow and best of all a Mullein with it's rockabilly hairdo. A new moth for the garden. 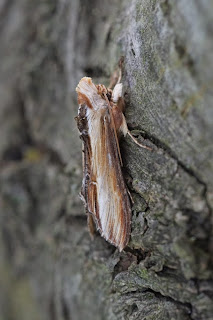 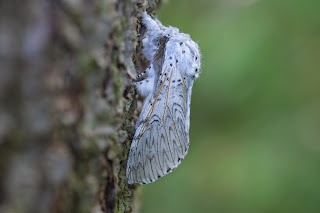 Success snatched from the jaws of defeat - all thanks to the ankle biter.

Posted by martinf at 7:33 PM No comments:

The spiders keep on coming...

A Sunday morning walk round Wimpole Hall grounds was a pleasant way to tire out the kids.

Poking about in cow poo to find beetles was initially fun until one of them picked up a stick by the wrong end and wiped resulting poo all over his top...

A few bits and pieces were seen but once again it was a spider that caught my attention.

On a wooden bridge over the ornamental lake there were quite a few of these large jumping spiders trying to catch newly emerged caddisflies.

Not a great shot but identifiable as Marpissa muscosa. 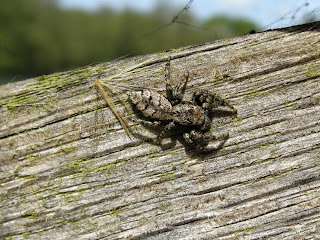 Posted by martinf at 7:51 PM No comments:

After saying that I wasn't looking at spiders, new and seemingly easy to identify ones seem to be throwing themselves at me.

Have just spent a rather lovely three days in coastal Suffolk, staying in Aldeburgh and visiting Dunwich cliffs, Rendlesham forest and Walberswick.

Primarily a family break, but did manage a few beetles and other bits and pieces.

The heaths had Dartford Warblers and Green Tiger Beetles but the forest didn't have too much partly due to the weather, but I did stumble across this fabulous looking creature, Diaea dorsata 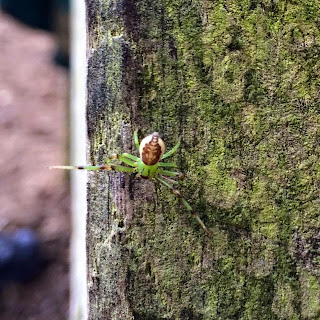 I'm not aware I've ever seen one of these before, so glad I stopped when I did and noticed it scuttling around a sign post. Another spider on the list! Might even hit double figures soon
Posted by martinf at 7:50 PM 1 comment: