The more I look, the more I see

What a month that's been (since the last post)...

Had a lovely week in Argyll, Scotland with the family at the beginning of April. Not many beetles but did see Otter, Pine Marten and White-tailed Eagle as well as some fantastic scenery, walks and even a couple of hill runs. But we picked up covid somewhere en route and we returned to Cambridge and tested positive.

Completely knocked me for six and have spent the last 3 weeks with next to no energy and a disconcerting brain fog that has made even the simplest decisions a real effort, nevermind more complicated ones. So grateful to not have had classic covid sans vaccines. Government says it's all over, so that's okay then.

Anyway, given all that, I have not managed to get out and about for any natural history until today.

Energy levels back to normal I got up early and paid a visit to Woodwalton Fen in west Cambs and pretty much had the place to myself for a couple of hours. Lots of bird song and quite a bit of beating flowering hawthorn and other assorted foliage. 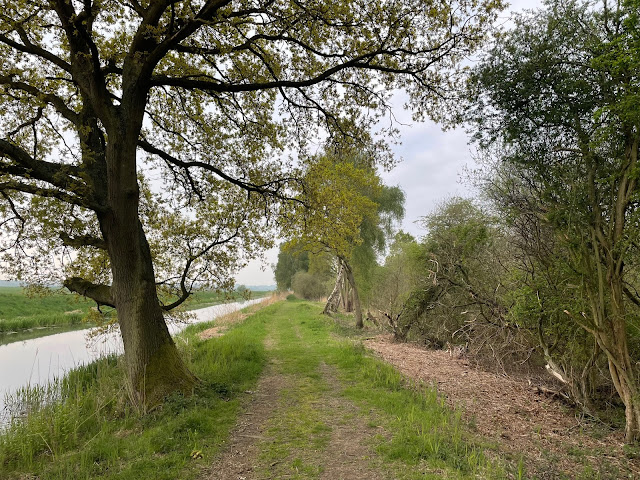 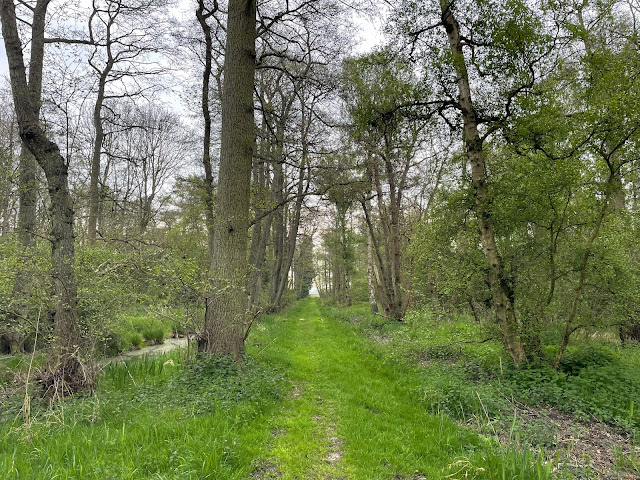 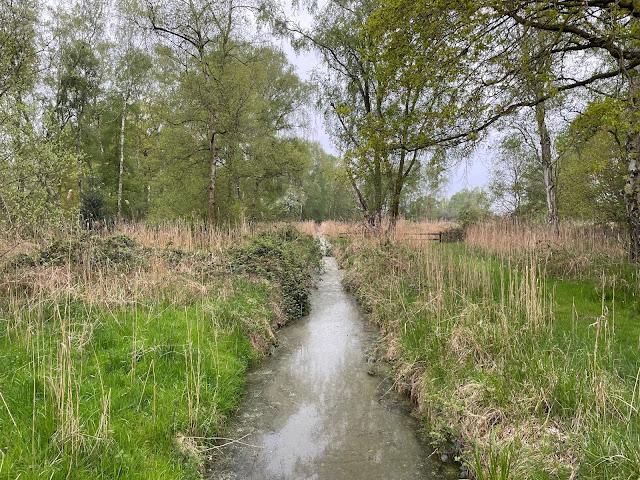 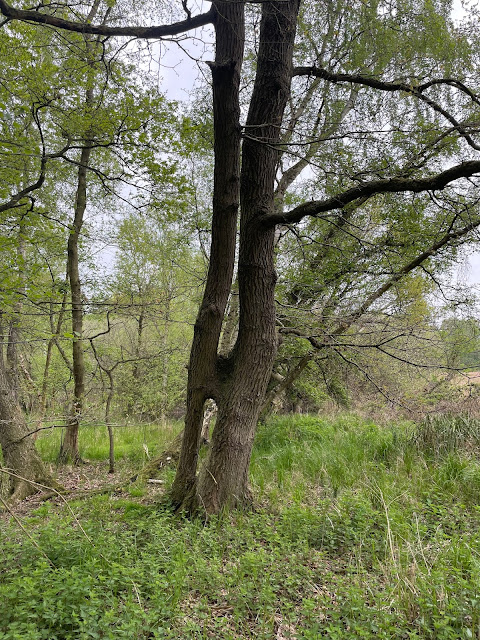 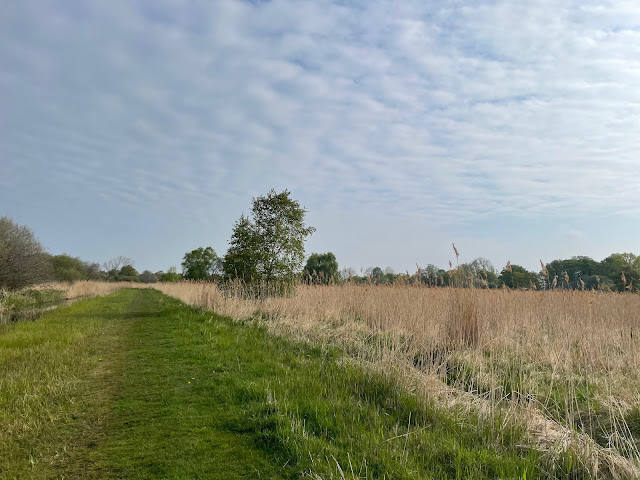 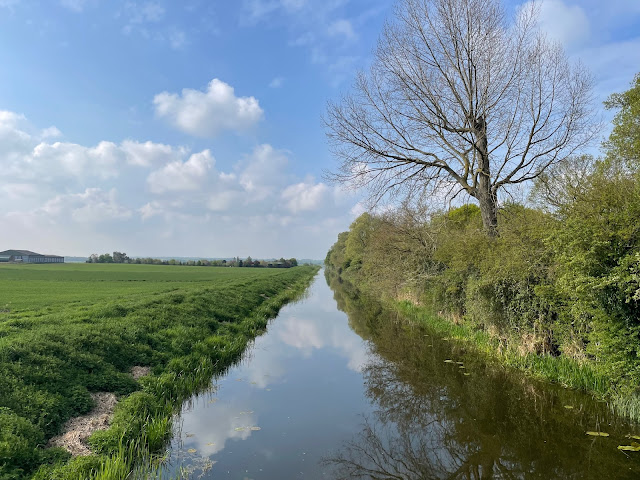 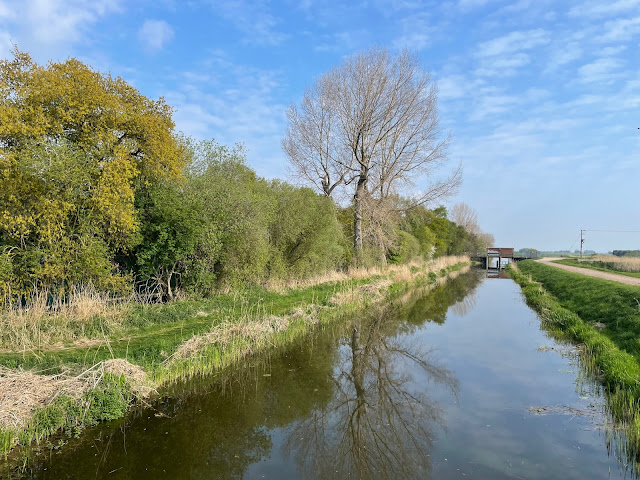 It was probably about a week too early for it to be absolutely hooching and the air was still cool out of the direct sun. Species number was quite low but it was just lovely to be out again and finding bits and pieces. I've a few weevils and scirtiids to look through but I did find one new species quite early on. Another one of those 'can't believe I haven't seen it already' beetles. Curculio venosus. The slightly elongated scutellum being the key feature. The colour also stood out in the field. 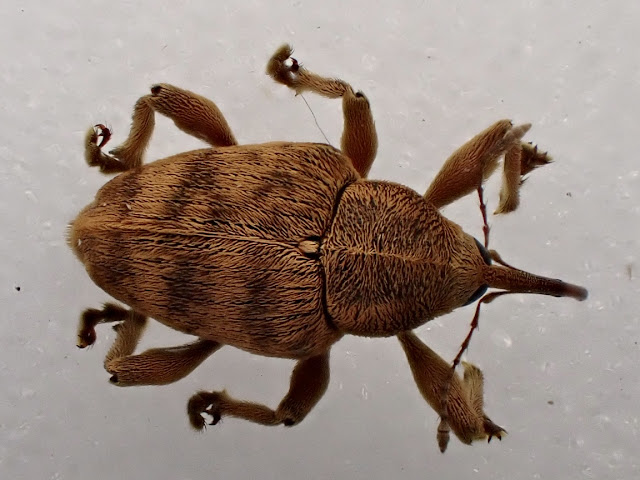 There were plenty of the longhorn Grammoptera ruficornis on the hawthorn and I also managed to find a single Rhagium mordax. 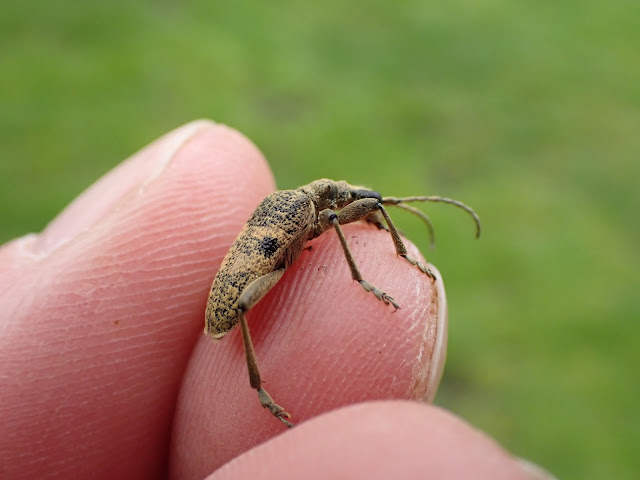 Back home for lunch and a bit of sweeping and I had my second garden record of the staph Astenus lyonessius. A rather lovely looking beast.

So hopefully that's me back in the beetle saddle and I can get stuck into late spring. Fingers crossed.

The post title comes from Kae Tempest, who I coincidentally saw at the Cambridge Corn Exchange this week. A really stunning and emotional live performance and their new album is rather beautifully introspective and hopeful too. Definitely worth checking out.

My favourite way of getting kicks

Staying up in Argyll, Scotland and popped to Knapdale for a walk. This is the place that in 2009 saw the first Scottish beaver reintroduction. Individuals were brought in from Norway and whilst not yet a self sustaining population the beavers have expanded their range a wee bit and the evidence of their presence was hard to miss while doing a circuit of the loch where some of them live.

There were plenty of obvious knawings, from tiny saplings through to some fairly substantial trees. 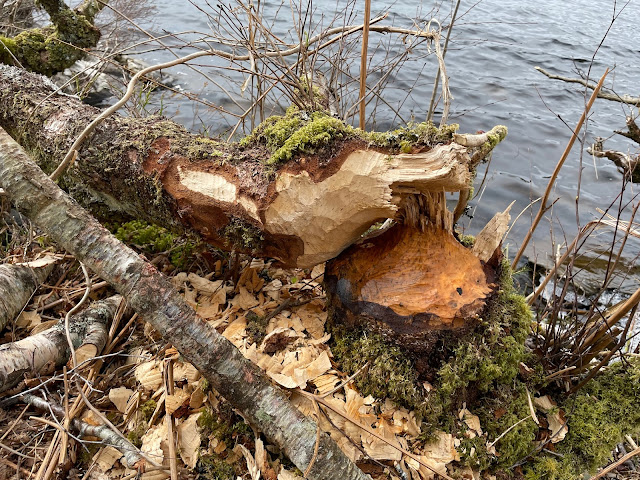 In places their dams were keeping the surrounding pools about a metre and a half above the main loch water level. Pretty amazing when it's only done with sticks, twigs, leaves and mud. 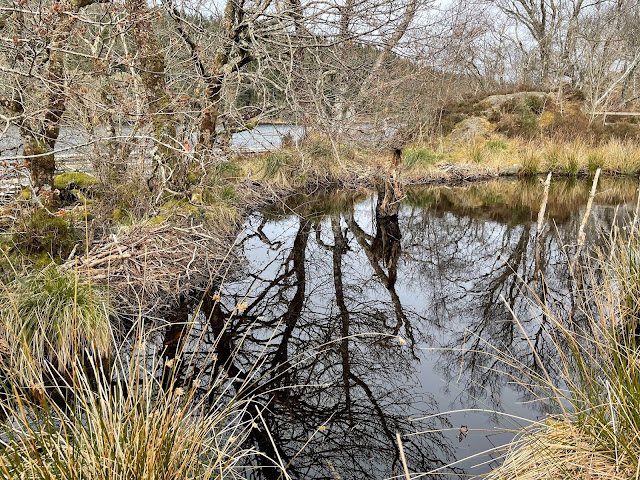 The lodge we saw was a fairly substantial affair. A suitably crap and zoomed in phone image I'm afraid. 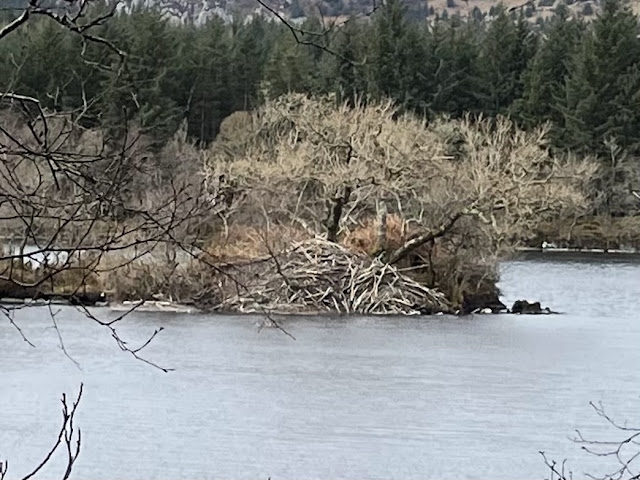 On the vegetative front the invasive alien (and alien it looked, more triffid than anything else) American skunk cabbage Lysichiton americanus was new for me and was seen at another site whilst visiting some ancient ruins. 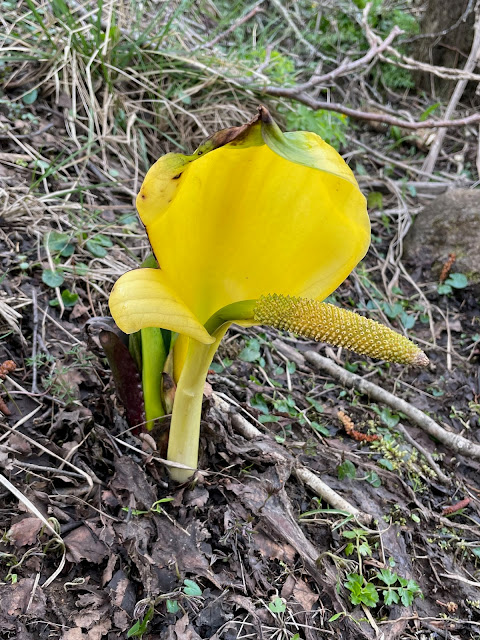 Think I will have to pop back early doors for a chance to see the beavers but definitely worth a try. Just need to get my hands on one and give it a comb for Beaver Beetles.

Post title inspiration comes from the highly non-PC Pop Will Eat Itself song.....

Posted by martinf at 5:04 PM No comments:

My faith in the fire

Whilst on my laptop this morning, catching up on the shit show that is world and UK news and having a cup of coffee I noticed this small beetle by the fire place crawling up the wall. 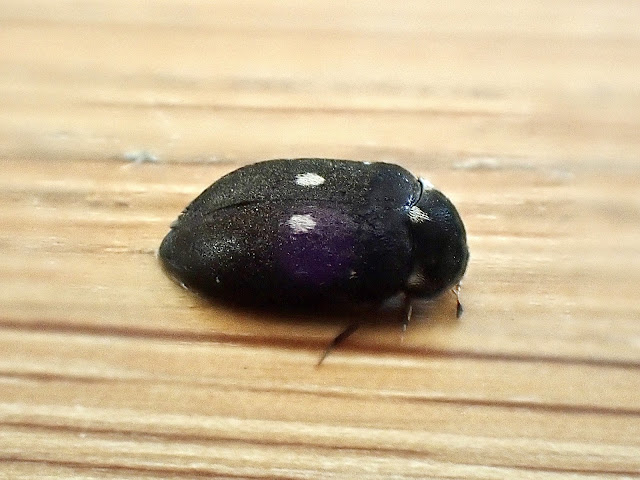 Only my second record of Attagenus pellio aka the Two-spotted Carpet Beetle. Both records have been been from home. The first was beaten from flowering hawthorn down the bottom of the garden a few years ago. This one presumably came down the chimney. A coleopterous Father Christmas if you will.

A good reminder to get the chimney swept at some point....

I've already used Kiss the Carpet lyrics in a previous post title so went with the equally awesome Burn. Probably the Sisters of Mercy at their absolute height. There's also a very good Radio 1 Kid Jensen session from 83 available too. Too young to have seen them first time around. Had to wait til 1992 before I finally caught up with them. Good though!

Posted by martinf at 5:44 PM No comments:

I had a day at the office today and as the sun was shining I made sure that I took a sweep net and beating tray for a bit of surreptitious lunchtime beetle hunting. It was nice to be out and about and lots of bird song gave it a real spring time feel. Quite a bit of insect activity too, mainly small flies but a couple of Comma were my first of the year

I beat lots of Scot's Pine which revealed only my second record of Eyed Ladybird amongst a few a bits and pieces. Examining the fungi on cut silver birch stumps gave me an aleoch that will need dissecting plus this tiny (1.2mm) Ciidid. 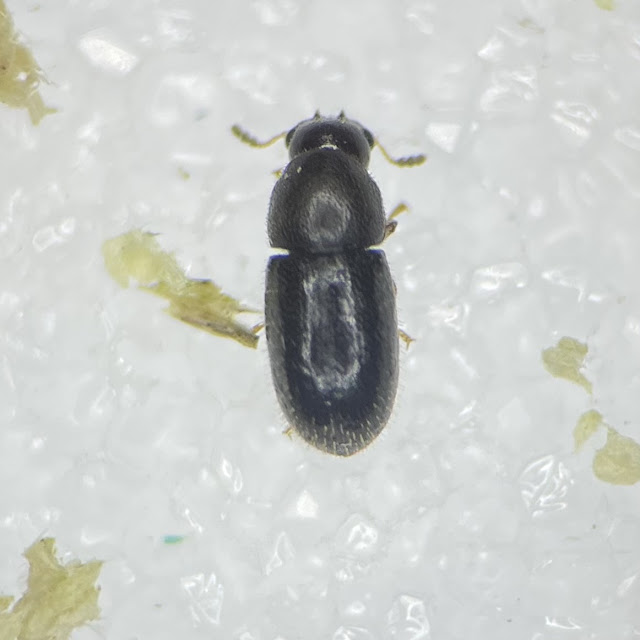 With 9 antennal segments and the cute little horns, I think this is a male Sulcacis nitidus, a new species for me. The larva feed on bracket fungus and the beetle is found in the south-east with some records up in Cheshire too. Given its size I can imagine it may be being overlooked somewhat too. In older literature it is known as S. affinis (Gyllenhal, 1827) or Ennearthron affinis.

The post title comes from a new single by Damefrisør. I first heard it played on 6Music and I have played it quite a bit since. Rather good.

Posted by martinf at 7:48 PM No comments:

The Ides of March

Last year I switched from producing hand written labels for all my specimens to printing ones. I invested in a laser printer and the resulting labels looked not only neater but it also meant that I could get the size of the labels down to match my new smallest card size of 12x6mm.

The only issue has been waiting until I have enough specimens to make it worth printing out a set. I usually wait until I have at least half a sheet of A4's worth. I can then guillotine the remaining bit off and re-use by feeding through the manual feed tray.

Anyway, tonight that's what I have been doing. Just need to get the labels on and get them in the right storage boxes now! 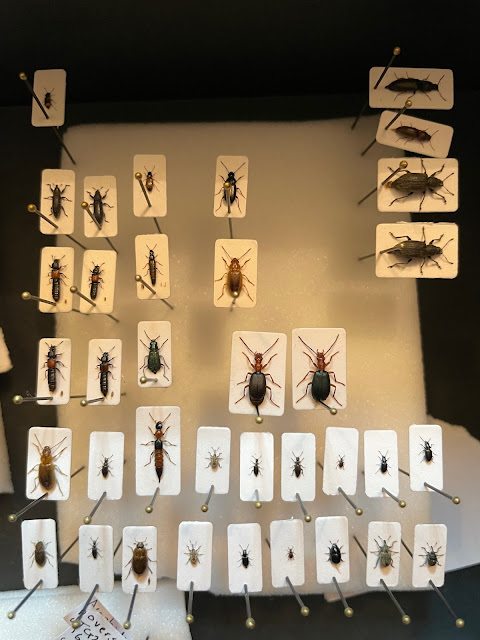 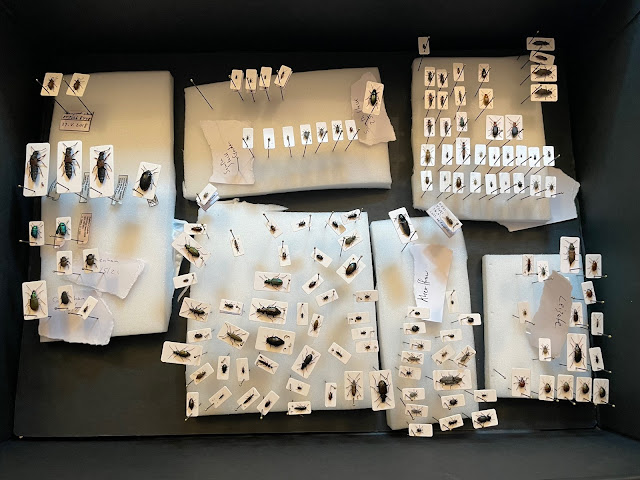 I find the process of identifying and carding, rather relaxing and can easily do hours infront of the microscope without batting an eyelid. Can't say that I'm as fond of the labelling!

Yesterday was the Ides of March and so in honour of the auspicious date I decided to give the MV trap its first outing of the year. The result this morning was 5 moths of 4 species. Still, nice to get the season off to a start

Hopefully just the start of things to come....
Posted by martinf at 8:24 PM 2 comments:

Last vacation was the same

So in my searching of the freezers and fridge I found another couple of errant tubes with beetles in. These (as with the previous one) were from a Spanish holiday back in 2017. This was a trip to the Picos de Europa and was somewhere that I hadn't visited since 1989.

In every way possible it was a successful holiday and was a real adventure for the two small kids, with a 24 hour ferry, whales, their first proper mountains and some pretty epic walks. It was so good that having concentrated on the eastern part in 2017 we visited the western section the following year. There was also loads of very cool natural history and a few beetles thrown in for good measure.

So given everything else going on in the world and the anxiety it generates it was rather nice to be looking at this beetle five years on and being transported back to a particular day and a place with amazing scenery and wildlife. 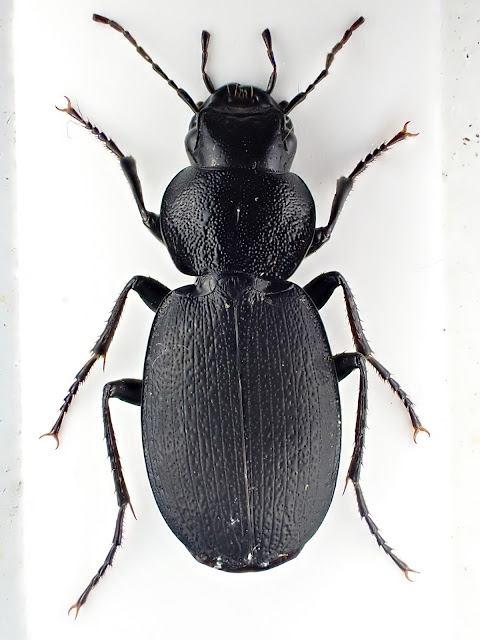 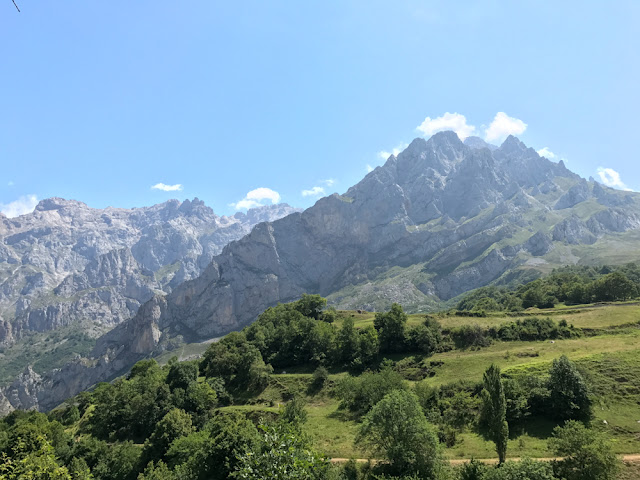 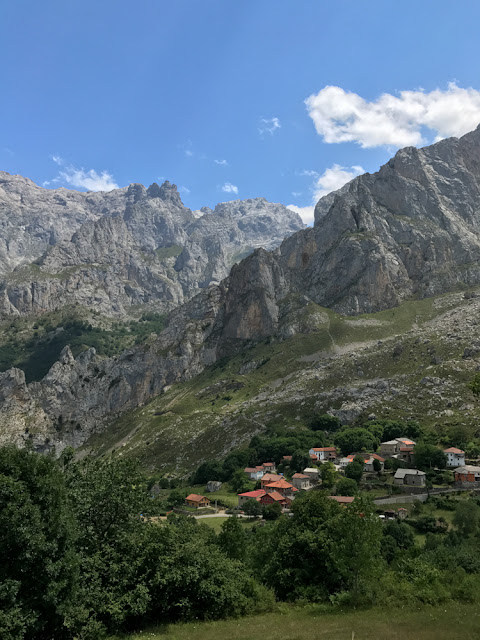 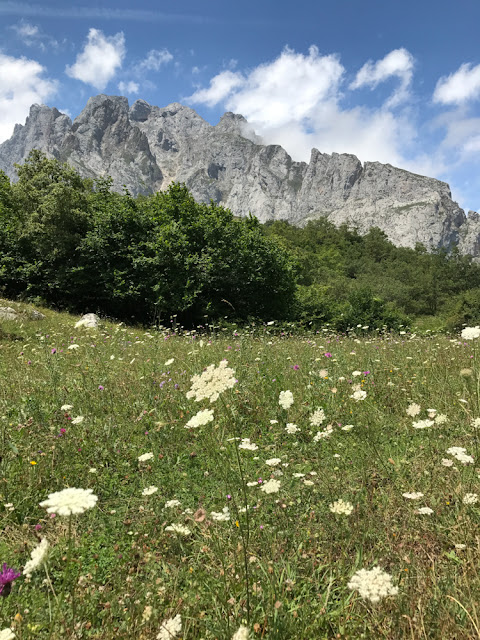 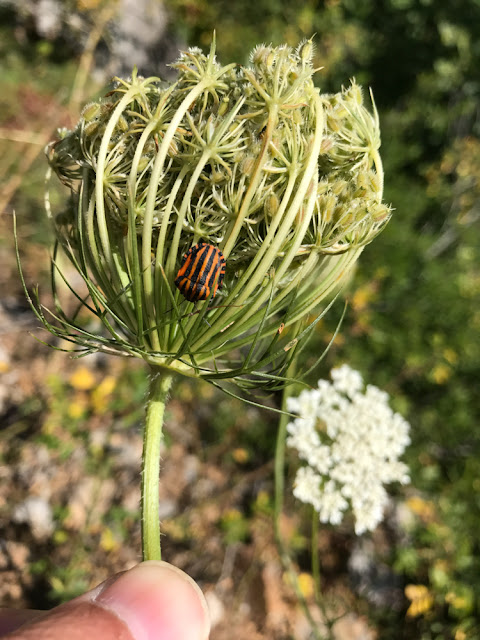 But what of the beetle? What species of carabid was is it? Well I quickly figured out it was in the genus Licinus but not one of the two species that occur in the UK. So that left me scratching my head until I remembered that I had a book of European ground beetle keys. 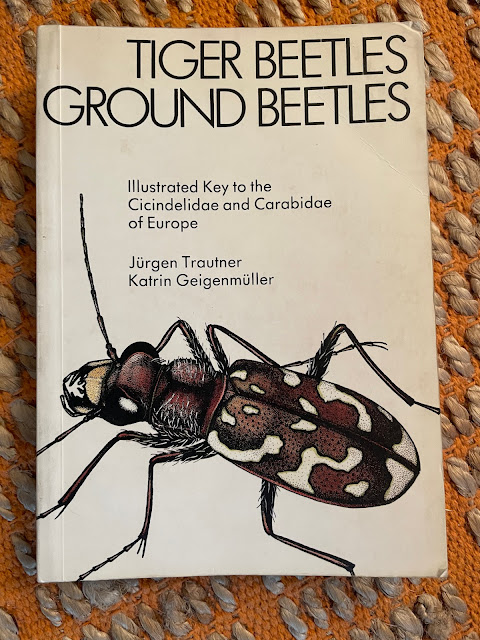 I had bought this a few years back but had never really used it. Whilst incomplete for several genera it seemed to have good coverage of Licinus so I gave the beetle a go through the appropriate key.
Quite a big beetle at 14mm it keyed quite easily to L. cassideus. Some online exploration did nothing to dim the possibility of that moniker and so am quietly confident that I have keyed and identified my first non UK species of beetle.
Where will it all end!
The post title originates from the brilliant Foals and the song Olympic Airways, from their first album Antidotes. Enjoy.
Posted by martinf at 7:56 PM No comments:

Shatter your illusions of love

So I have been going through my freezer looking for any stray sample tubes. Ones that have beetles in and especially ones that I have yet to put a name to. I found one such tube this evening and on first examination let out a fairly audible gasp and a small but firm expletive when I looked at the contents. 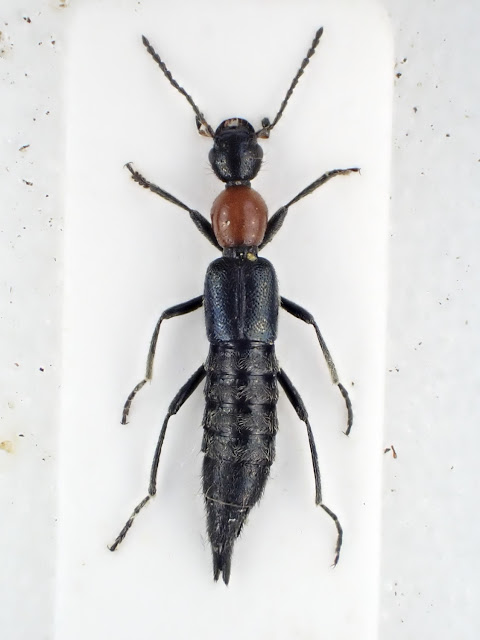 For a split second I thought I might have rediscovered a lost UK species but once I looked at the data label scrunched up in the tube, I remembered finding this beetle on a moss covered boulder, on the edge of a glacial meltwater river in northern Spain way back in 2017.

The staph is in the genus Paederidus which has 44 species worldwide, two of which have specimens apparently from the UK but neither of which have been seen since 1833.

So which species was this? There are 13 are known from the Palaearctic and four of these occur in Europe. P. punctiventris occurs in south-west Russia, around the Black Sea (so it's not that one) P. algiricus occurs in Spain and north-west Africa but not from the north coast of Spain so I can rule this out too. That leaves me with P. rubrothoracicus and P. ruficollis both widespread and the two ones supposedly once found in the UK in the dim and distant past.

The species are very similar but differ a little on size (always a difficult measurement with staphs) and in the direction of hairs on the tergites (upper sections of the abdomen). 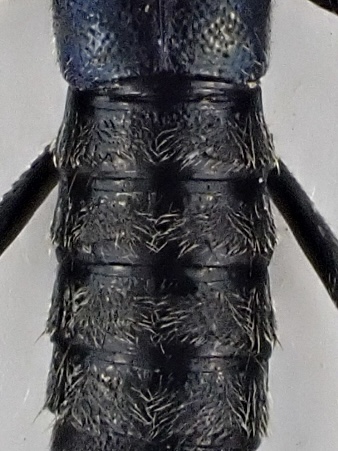 Pretty sure this is the latter, P. ruficollis. A species that occurs right up to the channel coast so could conceivably occur again over here.

Posted by martinf at 8:03 PM No comments: