The Bank Holiday saw some glorious weather and on Monday night the temperature stayed around the 10 degree mark so decided to put the moth trap out again. I was rewarded with 20 species include 2 individuals of the catchily named Pseudoswammerdamia combinella. This is a new one for the garden and a new one for me. A small moth but a real looker up close. The new Jim Wheeler Micro Moth Book gives it the name Copper-tipped Ermine and if you look closely it does have a metallic rear end. 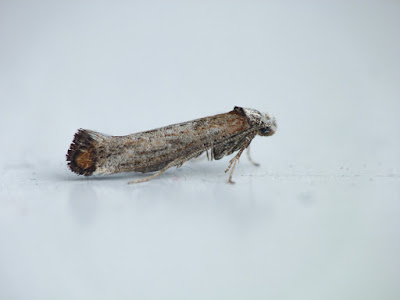 I also had the second garden record of Seraphim. I love moth names. 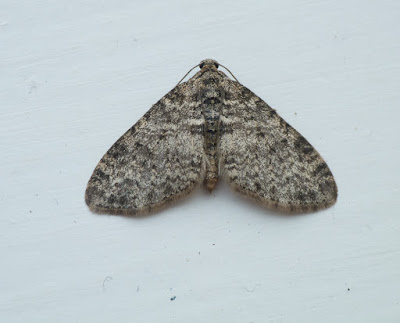 And as it sounds similar and is also a biblical reference how about a bit of the Nephilim to finish things off. Great song :) Enjoy!

Chalking it up to experience

I had a spare couple of hours yesterday afternoon so I paid a quick visit to Cherry Hinton Chalk Pits in south Cambridge. This is a Wildlife Trusts site and is quite a hidden gem surrounded by lots of housing and the local airport. The pits used to provide chalk for building and lime for cement but stopped production a couple of hundred years ago. I've weirdly never visited but shall return a bit later in the year, especially once some of the flowering plants are out.

Walking into the East pit you are hit by just out of place the place looks given the surrounding geography. 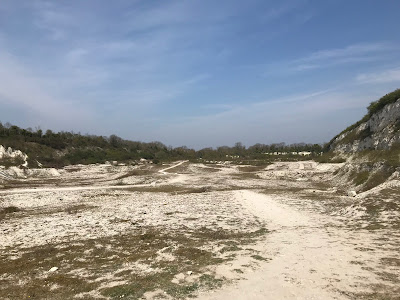 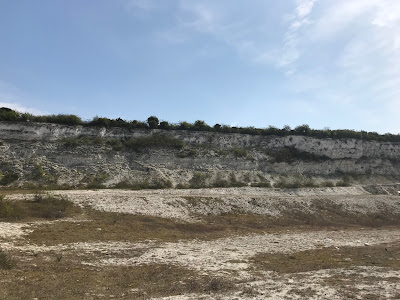 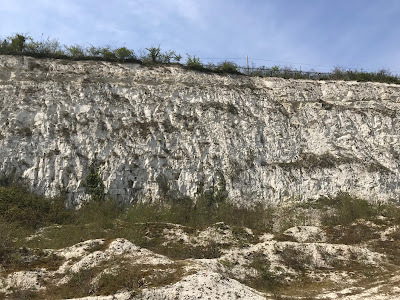 It really feels like another planet. It wasn't helped by the fact that I could hear all the traffic but couldn't see any people.

I had a look under a few stones the only thing of note was my first pill beetle, one of the Byrrhidae.
At just over 9mm it is a big one and keyed out to Byrrhus pilula. The coolest bit about this one was that the tarsal segments fold and hide into a grove on the tibia. So much so that they are almost invisible. 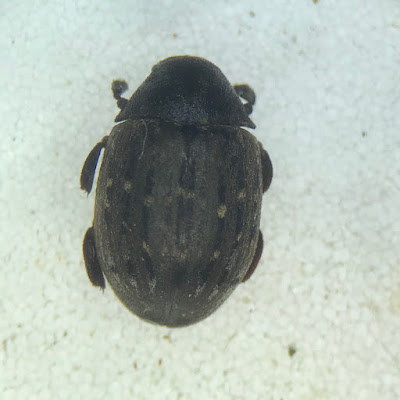 When I arrived home I noticed a bug on the wall, which looked unfamiliar. Turned out to be Himacerus mirmicoides, the Ant Damsel bug, and a new species for me. 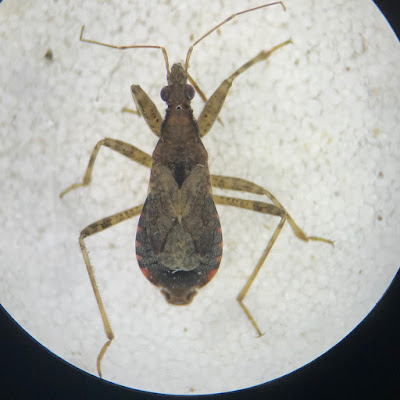 Posted by martinf at 6:40 PM No comments:

As easy as Pie

Always good, always worth watching. In this one Jonathan Pie tackles loss of nature and climate change. A
Posted by martinf at 6:02 AM No comments:

Popped out yesterday to the southern bit of Thetford Forest known as King's Forest. The most abundant thing I saw was dog shit. Piles of it everywhere and lots of dog owners on their morning walks.

In one of the forest rides there was a patch of Great Mullein Verbascum thapsus. I spotted a couple of flea beetles and potted one to see if I could key it out. 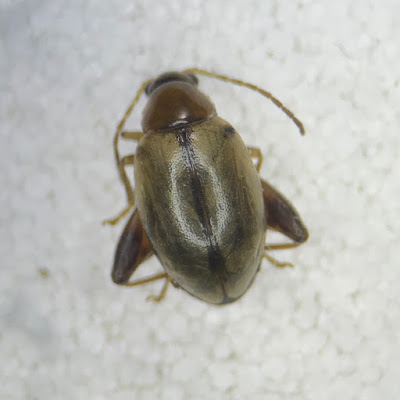 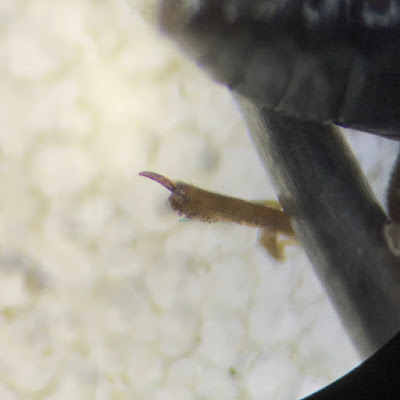 With the colour, size (4mm) and the long spur on the hind leg, this keyed out neatly to Longitarsus tabidus. It also feeds on mullein! A new species for me and one apparently whose main distribution centres on the Brecks. 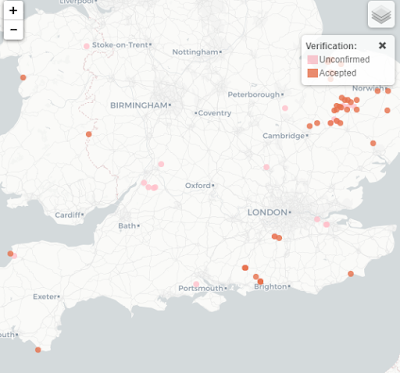 Posted by martinf at 8:31 PM No comments:

I made a trip back to God's own country last week. East Yorkshire.

It's where I grew up, and my parents still live there. Taking the kids for a few days I decided to grab a day to myself and visit Spurn Point. I used to go there a fair bit as a kid and then into my twenties but have only been a few times in the last couple of decades. I certainly haven't visited since the infamous Yorkshire Wildlife Trust Visitor Centre was built.

Getting there always seem a bit like going back in time. Going through Thorngumbald, Patrington and Eastington, these villages haven't really changed much in the 35 years I've been passing through.
And that's always been the attraction of visiting Spurn: it's like visiting the edge of the world, in the 1970s!

I arrived and parked just before nine and decided to walk point-wards. A few years ago the decision was made to stop protecting the sand spit that is Spurn and very quickly the sea breached the middle part. The system has always been dynamic, it's just that people naively thought that they could prevent mother nature's wishes.

Walking across the breached part I noticed something in the sand: a dead porpoise. I decided to check it for beetles but soon forgot to breathe through my mouth and was assaulted by Beelzebub in nasal form. I crawled away on hands and knees, gagging and retching with no beetles as reward. 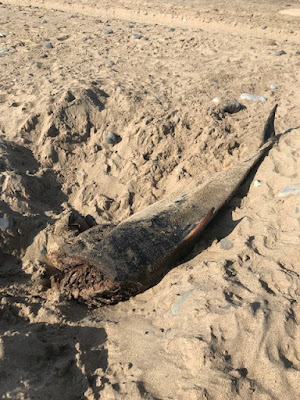 Getting back amongst the sea buckthorn, Browntail moth caterpillars were everywhere. On the ground and spinning their silken capsules in seemingly every bush. 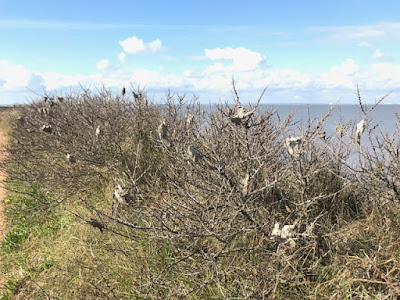 The sun was out and the Point looked stunning. It was cold in the wind but nestled amongst the dunes it was almost balmy. 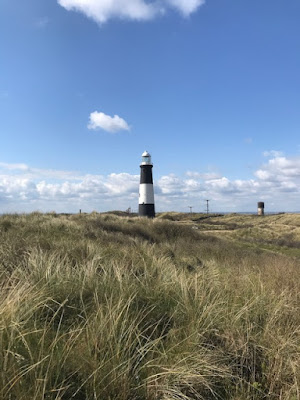 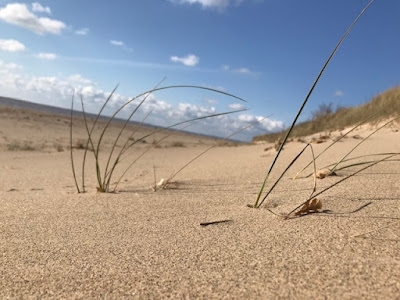 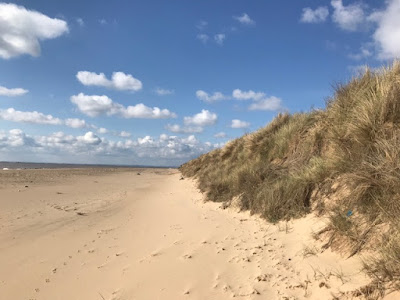 I found a quite spot to look at some plants. I soon realised that I'm pretty shit at plant ID and that's being generous.

I picked one plant that I thought was obviously in the cabbage family and then spent ages trying to work out what it was. I think it's Shepherd's Cress Teesdalia nudicaulis but am happy to be corrected. 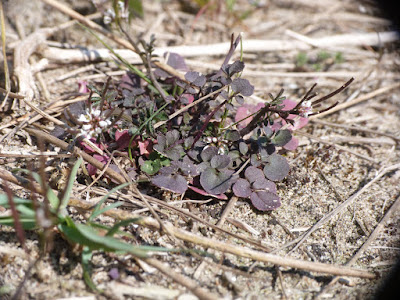 I then had a look at this tiny thing. Still not sure. 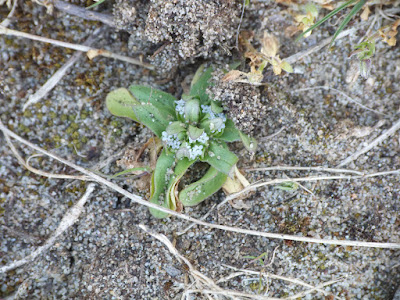 I really think I need to make more of an effort with green things!!

It was nice to see a flock of Brent Geese feeding on eel grass before they head a long way north to breed on Arctic Tundra. Also a fair few Curlew gave themselves away from their bubbling calls out on the mud. 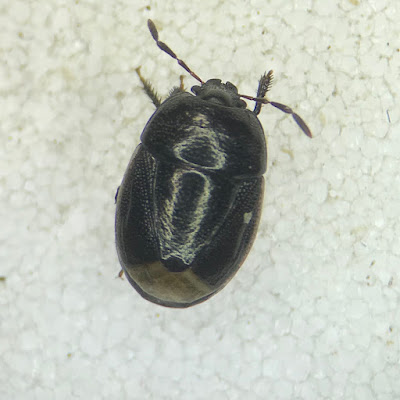 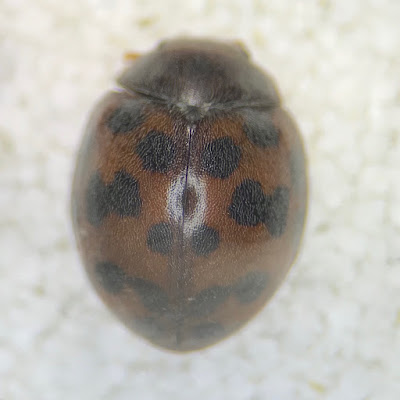 I made it to the Point then turned tail and headed back the way I had come. It really was a beautiful day.

And what of the infamous Visitor centre? Well it's perfectly fine and I had a decent coffee, but it has brought a bit of the 21st Century to Spurn and I'm not sure that's a good thing...
Posted by martinf at 7:36 PM No comments:

On yesterday's lunchtime walk, the sun was out and the air was warmish. There were a fair few insects on the wing but I decided to have a look in some rotting fungus and birch branches to see what I could find.

Everything was small. Really small. I was struggling even with my hand lens to get to family level so potted a few beetles for later identification.

First up was this tiny staph, only 2.4mm. I'm still struggling but the suggestion has been that it's one of the Omaliinae. There are free keys here and here so will see if I can get it to at least genus. 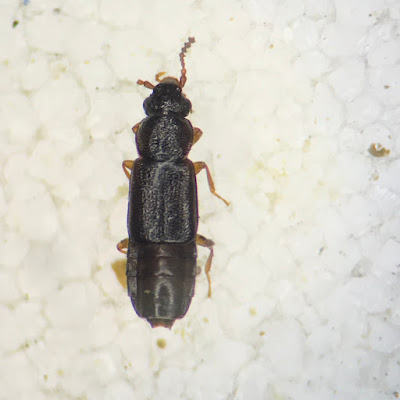 Next up was something a bit bigger...well 2.5mm. I knew immediately that this was a new species for me. I did what I usually do and went to the UK Beetle Recording page and eyeballed the family pictures. It looked to be one of the Cerylonidae so used the free key on Mike Hackston's site. It easily keyed to Cerylon histeroides which is the most common species. But new to me, and a rather cool looking beetle. 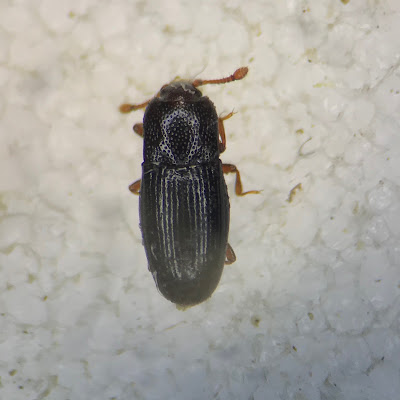 Then came the really small ones. Only 1.7mm and easily the smallest beetle I've yet to identify. Looking down the microscope the first thing that jumped out were 2 plate like protrusions. One on the head and one on the pronotum. I'd already guessed that this was going to be one of the Ciidae and luckily I found the commonest and the easiest to put a name to. Cis bilamellatus. Apparently this species originates from Australia and SE Asia, but was introduced to Kew Gardens in the 19th century with fungi and has since spread around Britain. 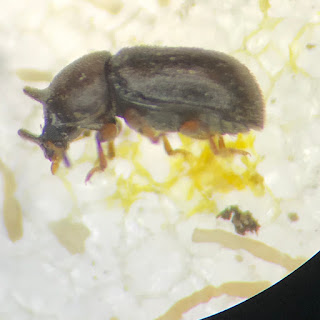 And the title of the post? Well the beetle is an Ozzie and easy to identify so the Antipodean spoonerism seemed most apt.
Posted by martinf at 5:51 PM 1 comment: