A recent post by fellow village moth-er, David had me almost running one evening to a small patch of Field Scabious along a footpath next to the drainage ditch that runs along our village.

The quarry was Nemophora metallica aka the Brassy Longhorn. I could only find a lone male sat atop one of the flowers, but what a moth! The larvae feed at first on seeds and later on leaves or leaf-litter, mainly of Field Scabious.

There don't appear to be many records nearby so a good one to connect with and one to keep an eye out for in future years. 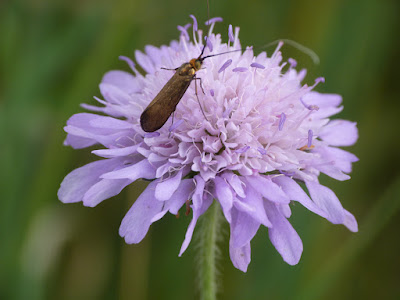 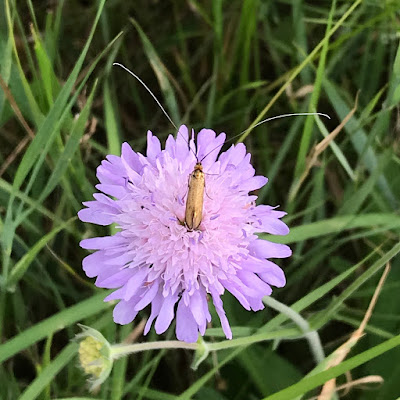 In other moth news, Short-cloaked Moth Nola cucullatella was a new species for the garden this week. One of those species that I can't believe I haven't recorded before. And then three turn up all on the same nigh! 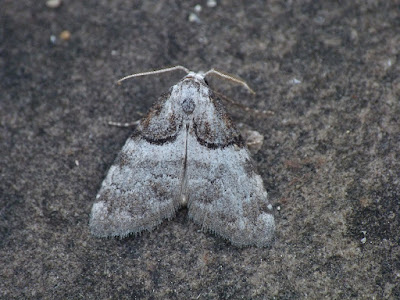 In celebration of the Brassy Longhorn's specific name, here's a bit of a metal band exploring its slightly softer side and channeling a tiny bit of Stairway to Heaven.

Posted by martinf at 8:14 PM No comments:

These days one of the best bits of moth trapping for me is the beetle bycatch. The summer months often turn up several species and some of these in good numbers. No two nights are the same and you soon realise that some beetle species seem to disperse, emerge or breed either under very specific conditions or over very small time frames.

A good recent example was from the moth trapping session at Wicken Fen mentioned in the last post. A couple of hour after sunset several pairs (and it did appear to be pairs) of small carabids began turning up at the traps.

I didn't immediately recognise them and assumed they were probably an Agonum species. I hadn't looked properly at the jaws. They have massive jaws.

They are in fact a Badister species and it was soon obvious that they were one of the dilatatus/collaris/peltatus trio. But which one? I'd assumed it would be the commoner dilatatus which I've recorded at Wicken before during the winter. I dissected a male and admittedly struggled a bit to clean the aedagus up, but it was then pointed out that the beetle was Badister collaris. 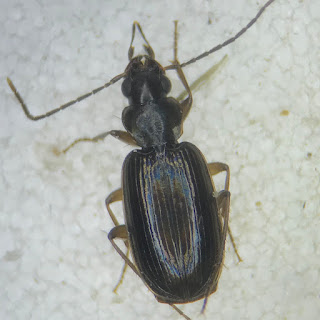 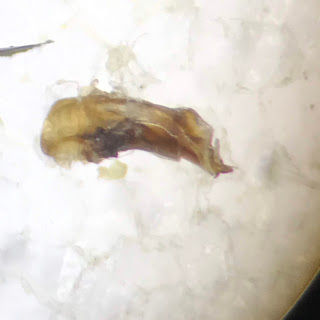 This appears to be a new species for VC29 and presumably for Wicken although others may have found it and the records haven't yet made it to recording schemes. It's a species that has been steadily moving northwards and so isn't an unexpected find. Assuming all the Badisters that evening were the same species then there were 10s of individuals around the traps.

The other new beetle that turned up was the rather lovely Phyllobrotica quadrimaculata, a chrysomelid and one that apparently feeds on skullcap. 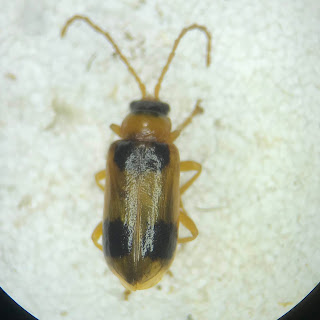 Posted by martinf at 7:32 PM No comments:

A couple of Sundays ago I and fellow moth-er Bill took a trip to Wicken Fen for a spot of trapping.

Armed with 3 mercury vapour Robinson traps we tried our luck in 2 different bits of habitat. One trap was in a bit of the woodland boardwalk section and the other two on the edge of a fen field.

The moth I really wanted to see turned up relatively quickly. 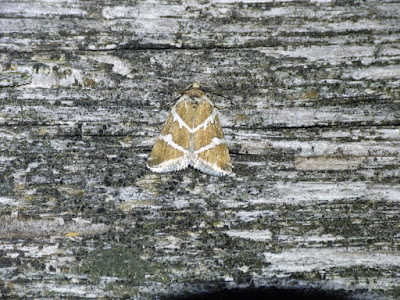 The rather lovely Silver Barred Deltote bankiana. This is a really restricted species, being found on Chippenham Fen and Wicken Fen in Cambridgeshire.  There is also a colony in Sandwich, Kent, with another colony near Dover. It apparently feeds on Purple Moor-grass and Smooth Meadow-grass.

The other species I was there to see turned up too. Reed Leopard Phragmataecia castaneae another predominantly East Anglian specialty. These are quite odd looking moths with the abdomen extending beyond the wings and looking almost larval-like. 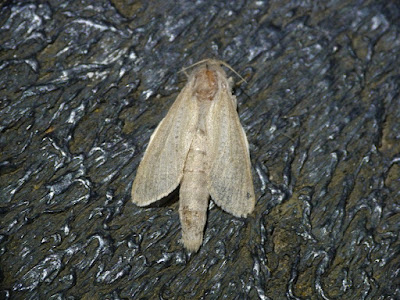 Another new moth was the rather lovely Cosmopterix scribaiella. My night time photography skills just don't do it justice! It was only discovered in the UK in 1996 and is restricted to the fens and a stretch of the south coast. 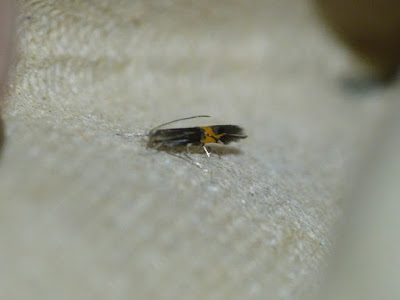 There were a good selection of other moths plus some beetles (see next post). Our list wasn't exhaustive as in the end we had to give up on trickier micros so that we could get home for some sleep before work!
Posted by martinf at 6:32 PM No comments: