I've been wanting to see the weevil that is Platyrhinus resinosus for a couple of years now. Pretty much since I first laid eyes on a photo of it on Facebook.

I finally caught up with one on a woodpile at work last week, but only had a phone to take a quick and frankly, badly out of focus snap.

I went for a walk today around Wicken Fen and found another sat out on some rotting logs. Incredibly well camouflaged but as I had a slightly better camera to hand I managed to fire off a few frames, before leaving this particular individual to carry on looking gnarly. 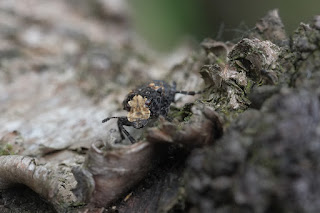 Posted by martinf at 5:56 PM No comments:

Where the fairies play

Down the end of my garden is a slightly wilder bit where I let the grass grow each year and I have several woodpiles for invertebrates.

Whilst down there last week I came across a micro moth that I've been expecting to see in the garden but had never turned up before.

Esperia sulphurella sometimes known as the Sulphur Tubic, although the scientific name is far pretty.

Up close they are stunning moths. Flashes of yellow and deep blue. I often wonder if these and the dancing longhorn moths are what gave rise to the idea of fairies down the bottom of the garden. 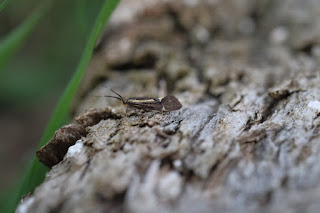 Posted by martinf at 1:38 PM No comments:

Day of the dead weevil

Some call it the Smiley face Weevil, most know it as Platistomus albinus but I think we should push for this rather awesome weevil to be known as the Day of the Dead Weevil.

Under a hand lens the head looks like one of those painted faces that Mexicans adorn themselves with to celebrate the Day of the Dead.

This one (a male I think because of the long antennae) was found sat on a log pile at work. They also seem to be bird dropping mimics and curl up and roll over when disturbed. 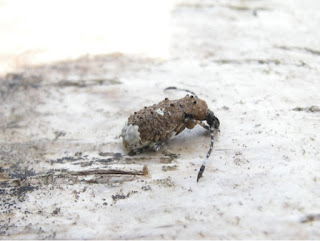 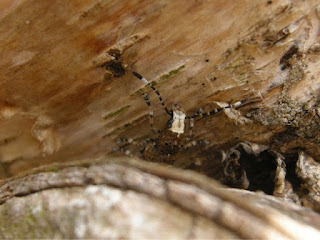 Posted by martinf at 7:20 PM No comments:

I've just spent a rather lovely bank holiday weekend on the Suffolk coast, staying in the village of Thorpeness and visiting a few locales. Typically a family break but I did manage a few snatched hours out birding in the early mornings. These yielded my first Ring Ouzel and Nightingales of the year plus many other common migrants.

There was also some time for beetling on Dunwich Heath and surroundings and I have a few beetles still left to ID.

On the last day we paid a visit to Sutton Hoo, (the site of some Anglo Saxon burial mounds and treasure including a famous helmet) as one of my sons has a fascination with history. The set up was frankly a bit crap (they didn't really know who their audience was) but there were a couple of nice circular walks (with singing Nightingales thrown in) to do there.

Whilst meandering the paths I came across the following cranefly which stood out from the couple of Tipula maxima it was with. A female Ptychoptera albimana, and although being common, completely new to me.

Reinforces that there's always new stuff to see, wherever you are. 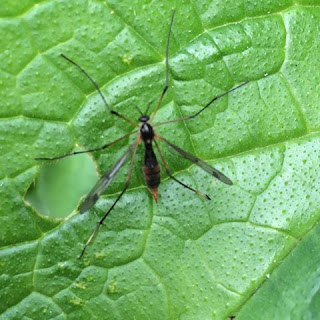 Posted by martinf at 8:34 PM No comments: