Four-spotted horseman of the apocalypse


Things have been hectic at work and have just come back from 5 days in Rutland at the Birdfair. It was great to catch up with a whole lot of folk I only see once a year but the preparation and time away has meant that I haven't had time to write any more posts about my time in Dorset.

I ran my actinic trap 8 or 9 times whilst away and caught a reasonable selection of moths, although none in great numbers. There were several British ticks for me in the haul including some rather beautiful moths.

Rosy Footman was caught on two occasions and while not rare is not one I've come across before. 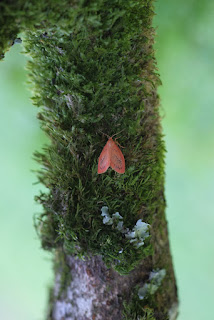 Brussel Lace is a lichen feeder with its stronghold in the south-west. These turned up on every trapping session and were subtly beautiful with some variation in the base colour of the wings. 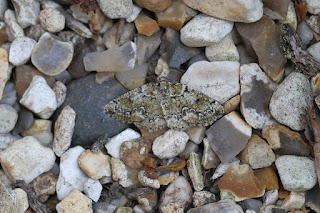 Another new one was the Mocha. Up to 6 of these were caught most nights. They were rather delicately marked and I think were my favourite moth of the holiday. 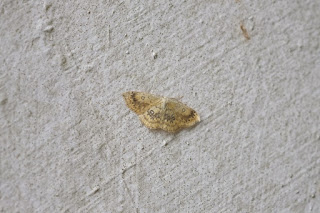 The title of the post was inspired by Four-spotted Footman. I've trapped these in France but it was nice to see again. I'd also forgotten how big they are. When they open their wings they really are a whopper. Capable of all manner of biblical destruction. Possibly...... 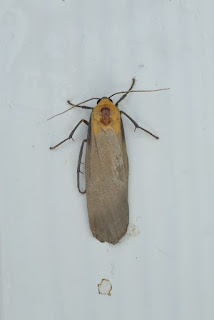 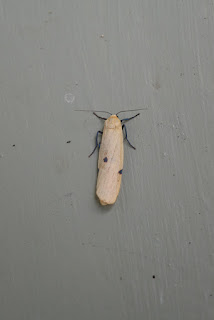 Posted by martinf at 7:20 PM No comments:

Eype of the Tiger

I've just returned from a great two-week family holiday to the west Dorset coast. Staying just inland from Charmouth, we had easy access to lots of great coastal sites. Fossil hunting and rock pooling were frequent events and the later turned up lots of goodies (for me at least!). 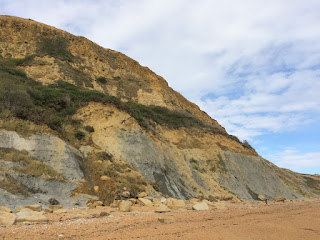 This bit of the coast is under constant erosion and there are frequent cliff collapses and land slides. This has lead to a very dynamic environment with patches of bare ground, pioneer vegetation and more established stuff. This is also riddled with gullies for water run off and seepages from underground springs. 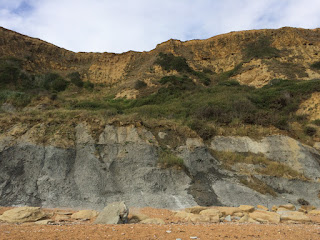 This is a fairly unusual environment in the UK and supports several rare and range-restricted species. My first taste of the Dorset undercliff (as it is known) came at Eype Mouth (rhymes with cheap!) on our first afternoon. 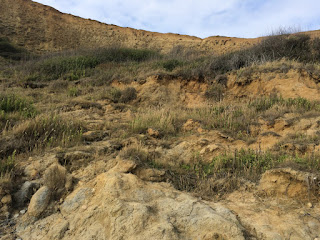 My main target was Cliff Tiger-beetle Cylindera germanica and these were quickly found scurrying around over patches of bare earth in between some of the pioneer vegetation. They didn't half move but I eventually pinned one or two down for a closer look. Smaller than the Dune Tiger-beetles seen recently at Holme, Norfolk, but still as feisty and ready to give a nip. 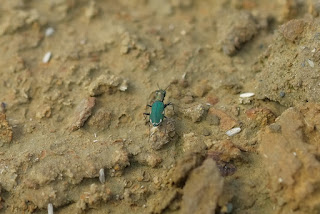 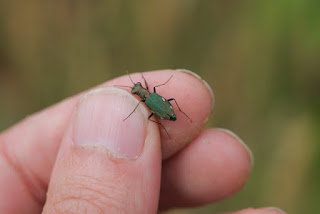 Now, I'm next to useless on plants, but a recent tip off by Steve Gale on his great blog alerted me to the presence of a real botanical rarity at this site. Slender Centaury is known from only two sites in Dorset and one of them is Eype Mouth. Having brushed up on what it looks like I found 50+ plants just to the west of the mouth. Similar to Lesser Centaury it is currently considered a full species. 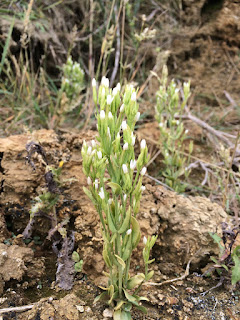 I only had a couple of hours here before the kids wanted to move off in search of ice cream, but I could have easily spent several more hours working the cliffs and seeps for more rare beetles.