A family walk yesterday to a local National Trust property ended up with the kids building a den from logs. I ended up turning some of the larger pieces and found a couple of these colourful beetles, Badister bullatus. These are distinguished from similar species due to their pale first antennal segment and black scutellum. A very widespread species pretty readily found at this time of year under logs. 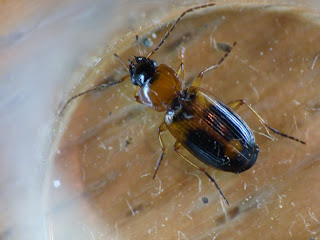 Posted by martinf at 7:17 PM No comments:

There had been a big influx of Convolvulus Hawkmoths into southern Britain in early September with large numbers seen along the coast. I never expected to catch one but when I went out to check my trap on the morning of September 25th a large shape was sat on the wall of the house.

This made a total of 9 hawkmoth species for the year in the garden. I suspect I may never add another!

NB: I let it go that evening and it turned up in next door's trap! 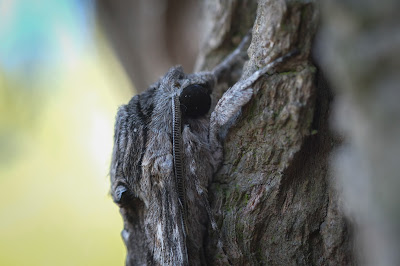 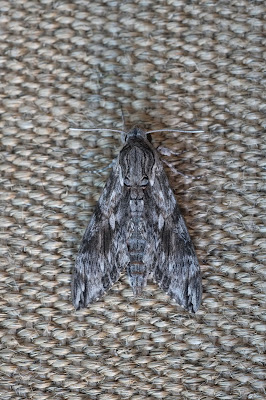 Posted by martinf at 6:54 PM No comments: 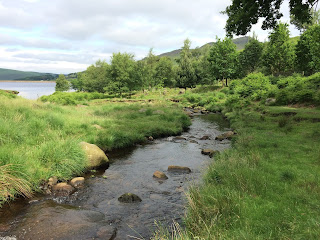 You may have noticed lots going on in the media recently around banning driven grouse shooting. For me the thing about it that needs reform (as well as the stopping of illegal raptor persecution) are the land management practices that tend to **** up the environment: the draining of blanket bog, excessive burning, soil erosion and loss of stored carbon into the atmosphere.

The question is once these moors have been shagged to within an inch of their life, is there any coming back from this.

Earlier this year I spent a day visiting RSPB's Dovestone reserve in the north west Peak District to see how they are reversing the effects of this bad management and restoring not only blanket bog but the nature that thrives there.

The land is managed by United Utilities and the reservoirs provide drinking water. The most amazing fact I learned was that a third of the reservoir capacity is taken up by peat that has run off from the moor after being drained. This means these reservoirs can store less water for drier times and probably ultimately means we have higher water bills as the water is so brown that it has to be cleaned before going out to customers!

Blocking drainage ditches means that water drains more slowly and allows the peat sediment to sink, so stopping it from entering the reservoir. 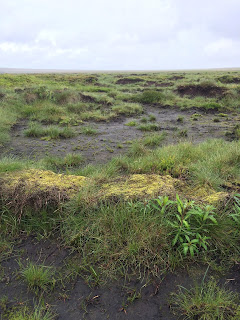 This ditch had been blocked with hay bales which are slowly rotting. Behind them bog is being reformed. Plugs of sphagnum moss are planted in suitably wet places and allowed to take hold. Over time these spread, holding water and reestablishing the blanket bog. There's a lot of work being done and much of it has to be done by hand. There are some amazing volunteers who have made alot of this possible.

There were lots of the rather beautiful Wood Tiger moth disturbed from the vegetation. It was a spectacularly bleak and beautiful place, with breeding Dunlin and Golden Plover out on the moor and I got to tramp around for a few hours taking it all in. Must get back there again soon.

NB: Just under a year ago Dovestone featured in a mystery death that has never been solved. The police investigation that followed is fascinating and worth reading about
Posted by martinf at 1:30 PM No comments: 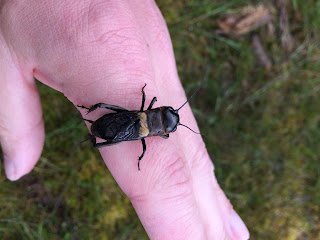 The post title sounds like something that might indicate a mid-life crisis in a man of my age. However, the real reason for it was a trip out earlier this year to help in a translocation project for Field Crickets Gryllus campestris.

In the UK, the Field Cricket has disappeared from most of its historic range, due to agricultural changes resulting in a loss of shifting systems, lack of disturbance by livestock and increased rates of vegetation succession. By the 1980s it was confined to one site in West Sussex with less than 100 individuals and was expected to go extinct.

Since that time, there has been a concerted effort by several groups and individuals to shore up existing populations and to create new ones by introducing individuals to suitable sites.

I spent several hours at Farnham Heath in Surrey trying to catch adult crickets. This involved first of all finding the burrows (which are subtly different from Minotaur Beetleesons) with their semicircle singing arena at the entrance. Then a piece of grass is used to entice them out. This is the tickling bit. Once out due to their curiosity they can be placed in a bag and then moved. Males are usually easier than females to find but we quickly managed a few of each sex.

The crickets where then taken to another bit of the reserve where they'd be unable to colonise naturally (they are flightless and there are roads bissecting the habitat). On arrival we found some suitable place and let them go to reorientate themselves and to find a place to burrow. Hopefully next year will find that they have successfully established and are breeding

Posted by martinf at 2:16 PM No comments: