It seems like yesterday that I was getting ready to celebrate the millennium. I can't quite believe that all that time has passed and that life has changed in so many unexpected ways, and some expected ones.

I'm 20 years older than then, and that has consequences (cue squeaky knee). I suspect that this New Year's Eve I'll be lucky to even see in the New Year  and will probably venture up the stairs to Bedfordshire long before the bells ring it in. These days, a post midnight bedtime, irrespective of any booze intake, induces a similar next morning feeling to a hangover. That's age for you!

I'm not going to do much of the latter except to say that three visits north of the wall to Scotland were a particular high. Just being out and away from lots of people was incredibly good for the soul. I did see a few cool things including a non-stakeout Pine Marten, but for me the highlight there was just walking through the Caledonian Forest at either ends of the day, taking in the landscape and feeling rather insignificant.

So what about next year...

No massive plans, I want to keep plugging away at beetles. There's definitely been a shift in my ability to recognise and ID things this year. Luckily it's a shift in a positive direction!

I'm getting through specimens far more quickly and my carding has improved. I'm also enjoying getting all my records entered to look at where I've been/might visit. So with that in mind I've decided to try to make 2020 the year that I visit and record beetles from all 40ish 10km2 squares in Cambridgeshire. 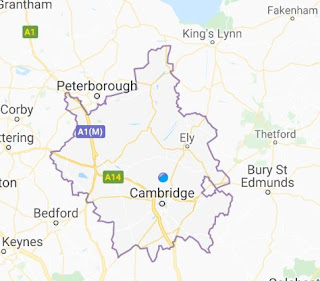 Some of these will get filled easily through many of the regular trips but many, especially at the northern end, will need to be specifically visited. I seem to only have done any biological recording from about half of these squares previously so there will be some new places to visit. But many will be flat arable deserts with very little to offer but it will still be interesting to see what might be there to find. It will also mean I venture to some differing habitats. From saltmarsh (yes! I know, who'd have thought) in the north to some chalk grassland in the south. Plus a few rich fenland sites in the middle.

So that's my only real plan for next year. That and the aleochs.

I've made a stab at identifying some of the of the aleochs that I've collected over the last year and whilst being bloody difficult I'm keen to soldier on. Some of the details of tarsi number and other features on small individuals are a struggle for my microscope so I'm going to purchase a cheap compound to try and elucidate some of this detail. Anyway wherever I get to it will keep me out of trouble, I hope. At least it should give my brain temporary respite from politics and the current state of the planet.

So best wishes for 2020 and the New Year of wildlife. And remember to be kind. We need more kindness in the world!

A bit of winter tussocking

A day off a couple of weeks ago meant that I could get out and do a bit of beetling. The weather has been atrocious of late, with wave after wave of heavy rain. The ground is sodden with large areas under water. 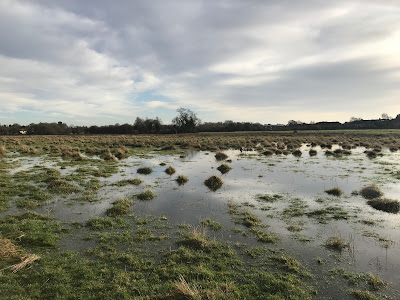 Linking up with fellow beetler, Bill we headed out to a site adjacent to the River Cam with lots of Deschampsia tussocks to search for beetles. The method is to cut the tussock at the base then place it upside down over a sieve and bucket. Then whack the **** out of it. 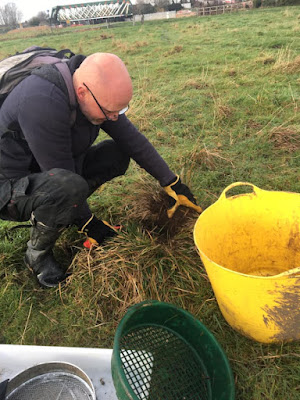 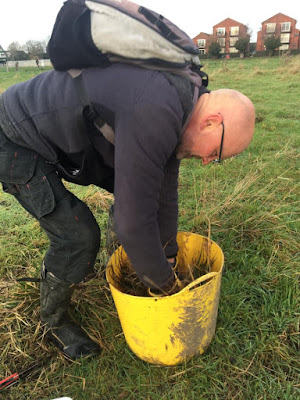 All the inverts spending the winter in the tussock should be evicted and come to rest at the bottom of your bucket! You can then stick the tussock back in the hole you took it from and it should regrow... 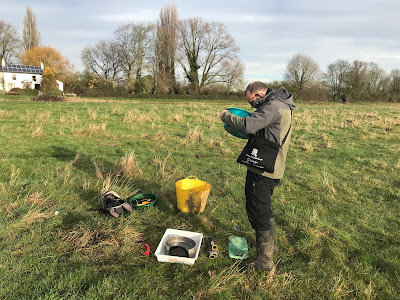 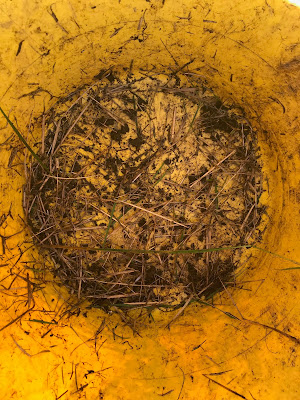 
There were only a couple of hemipterans including this Tingis ampliata which was a new species for me. 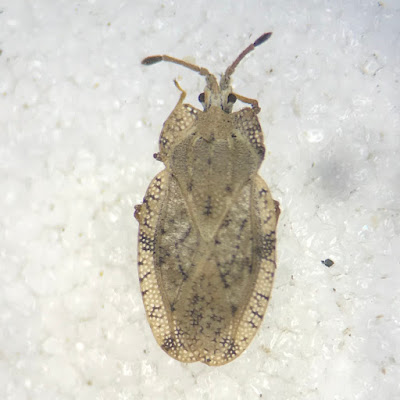 Posted by martinf at 7:40 PM No comments:

The pretty much only thing that's good about getting old is not really wanting anything for Christmas and birthdays anymore. Obviously I'm lucky enough to have pretty much everything else I need in life: a job, a roof over my head and food on the table. And I'm not one for just buying stuff apart from one thing.

Books. Absolutely love everything about them. Cook books, biography, fiction. The lot. I can't get enough. And let's be honest, once the lights go out and the endarkenment happens having hard copies for everything will be incredibly useful.

At least that's what I tell myself.

Anyway, I recently had a birthday. Not a big one. And all I asked for was books. Ask and you shall receive. Well something like that! 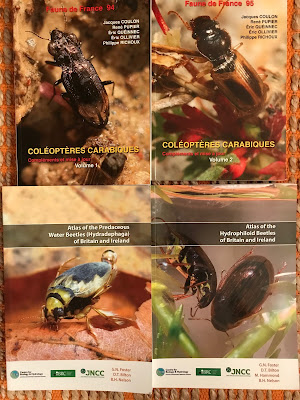 Come the big day I happily unwrapped a quartet of new beetle books, and boy was I a happy lad.

The two French books are supplements by Coulon to the original Carabid book by Jeannel. The original can be found in two parts here. My French is passable but there are still lots of technical words to look up and learn. There's so much info here and most (if not all) the UK fauna is covered, plus some that may make an appearance one day. The supplements are particularly useful for groups such as Bembidion and there are lots of good drawings of the naughty bits to aid ID. 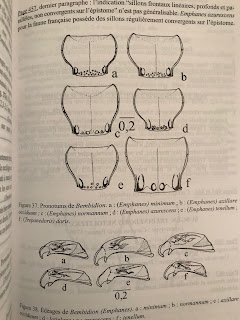 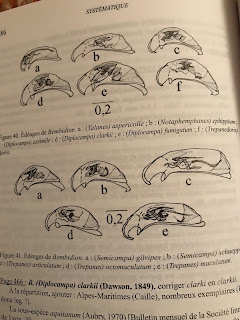 The other I got given are the two water beetle atlases. But they are so much more than just maps.
There's stuff on ID and taxonomy, life-cycle alongside sections on habitat and distributions. And then there are the maps. Every species gets one and the records are broken into pre and post 1980 plus also sub-fossil. 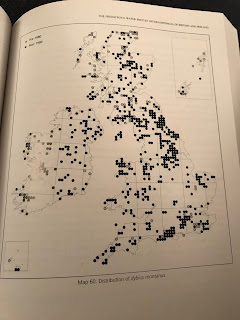 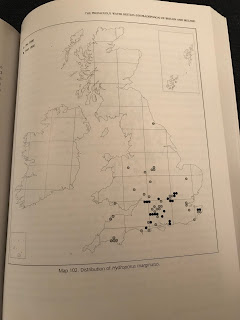 There's plenty here to keep me occupied through the cold, dark winter nights whilst dreaming of warmer days looking for beetles...
Posted by martinf at 7:53 PM No comments:

Email ThisBlogThis!Share to TwitterShare to FacebookShare to Pinterest
Labels: books

A flash of red

I managed 30 minutes outside at lunchtime today and found myself looking in and around several bits of dead wood in various stages of decay.

The best find was this Aphanus rolandri, overwintering in a small gap in a piece of well rotten larch. A new species of bug for me. 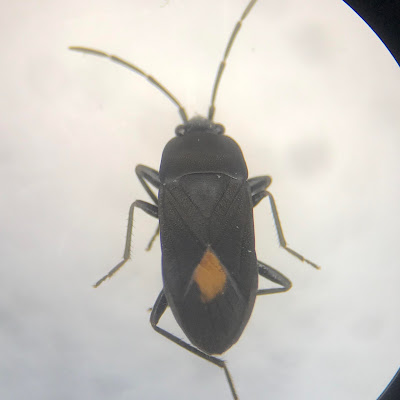 It's really distinctive and likes dry, sheltered and well-drained habitats which have a layer of leaf litter present. (EDIT: according to Tristan Bantock it likes plants in the family Fumariaceae to eat. It can sometimes be found in arable margins under Fumitory and there are some garden records possibly associated with Yellow Corydalis.)

(EDIT: according to Simon Knott on Twitter there a good story behind this species scientific name.)

The map on NBN shows it has a southerly distribution with a few scattered records elsewhere, especially around the Brecks. Well drained dry habitats and all that... 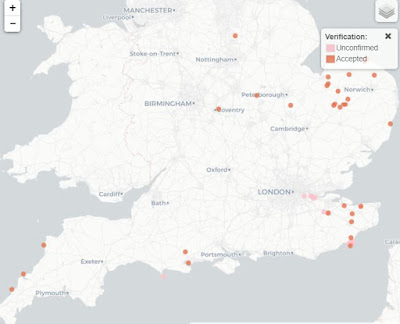 Posted by martinf at 7:07 PM No comments: