With the abysmal weather of the last few days and a mounting workload before summer holidays next week, natural history has taken a bit of a sideline.

Firstly, Lunar-spotted Pinion Cosmia pyralina, not one that was on my radar and threw me at first when i turned over the egg box. Not unsusal locally though apparently. 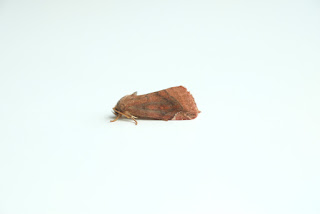 Secondly, a new moth family for me, Ypsolophidae with the offender being Ypsolopha scabrella.
When seen up a close a really cool moth with three little tufts of scales along its back. What are their function?!? 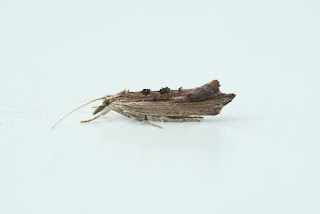 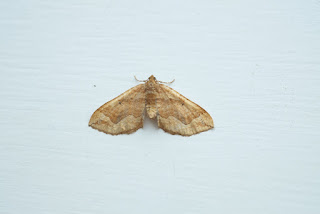 Off to Dorset for a fortnight at the end of this week. Not somewhere I know at all so hopefully will turn a few new things up and I'll be taking the moth trap to keep things ticking over, but my number one target species is Cliff Tiger-beetle........
Posted by martinf at 7:22 PM No comments:

There's a fair bit of variation in Buff Ermines Spilosoma lutea but this one that I caught last night is the most well marked individual I've seen.

I've found a couple of similar individuals online but nothing like it locally before.

You live and learn! 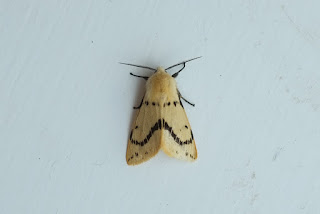 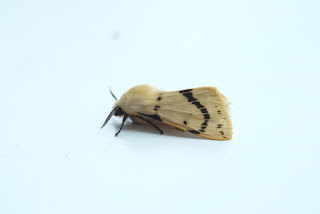 Posted by martinf at 6:01 PM No comments:

Tiger in the kitchen

I normally just ignore craneflies but this one caught my eye as it was a bit of a looker with those stripes. Turns out it's a Tiger Cranefly Nephrotoma flavescens.

Not one I've knowingly seen before. Apparently adults take nectar and pollen from flowers. Their larvae look pretty much like all other Tipula leather-jacket grubs. 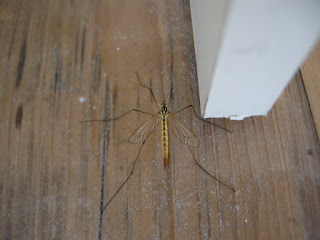 Posted by martinf at 7:08 PM No comments:


When I was about 17, I had a real crush on a girl that I used to see periodically at Spiders Night club in Hull. Her signature attire was a pair of black and white hooped tights that she wore with para boots and some stressed and ripped tops.

It was one of those longings from afar and I never even knew her name, let alone made any type of connection with her.

In fact I hadn't even thought about her for 20 years until one of these beauties rocked up in the trap last year with its stripey legs. I've had another couple this week and they made me cast my mind back to what it was like being a hormonal teenager with love lust on his mind. 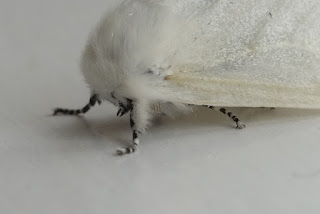 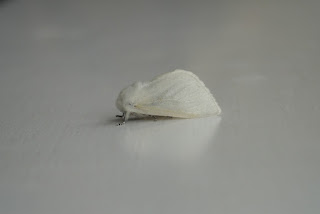 Posted by martinf at 7:30 PM No comments:

All the best things are unexpected, especially longhorns. While visiting friends in Norfolk I was looking at flower heads for hoverflies and came across this longhorn beetle. I knew it was one I hadn't seen before (mainly because I've seen very few!). Took a few of pics of it feeding before it flew off onto my friend's t-shirt. Looks like it is Stictoleptura rubra, sometimes known as Red Longhorn Beetle.

A rather pleasing unexpected tick. 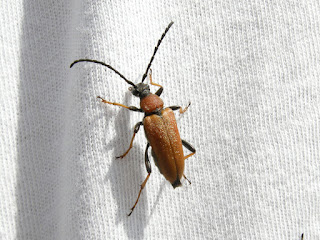 Posted by martinf at 9:45 AM No comments: 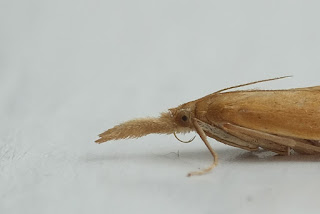 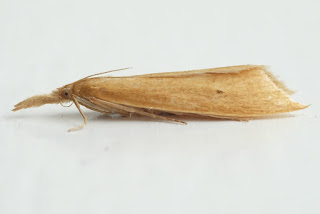 Posted by martinf at 7:25 PM No comments:

The migrants are coming...

My inland Cambridgeshire garden trap finally got in on the action with a Small Mottled Willow this week. A lifer for me too. 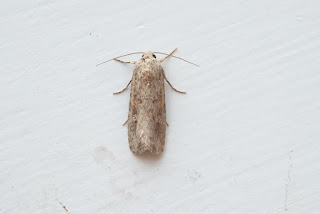 Also new for the garden was this Rhodophaea formosa, the larvae of which feed on hedgerow elms. It's also rather a looker! 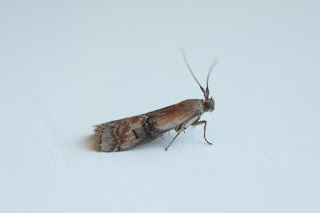 Posted by martinf at 7:16 AM No comments:

Get them when they're young

Sunday morning saw eight Privet Hawkmoths in the trap plus two getting jiggy with it on the kids' climbing frame. A record number for me.

They're one of those species that when you show people, they just can't quite believe that these moths cruise gardens in the local area when everyone is asleep. Plus they are massive, which amazes most people.

My youngest son really enjoys the early morning 'reveal' where we turn the egg boxes over to see what the the great god of mothing has brought us. So much so that he decided to have a go at the meme of hawkmoth on noses that people post on social media. 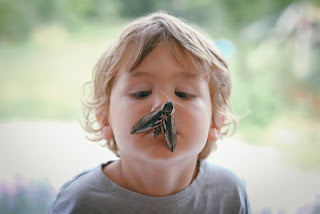 He may go off nature as he gets older but I suspect the memory of a bloody big moth crawling around on his face will stay with him for a long time. He thought it was awesome!

Posted by martinf at 5:16 PM No comments:

Had a couple of these Burnished Brass in last night's trap and so had them out for a photograph. One of my favourite moths, mainly because I caught them on my first ever moth trapping session back in 1985 on the Isle of Arran. Plus it's the only species I can remember apart from an Old Lady which I think was an island first at the time.

Many species of moth - both macro and micro - have these humps. I've no idea what their function is but I'd love to know. So if anyone out there can elucidate or has any cunning ideas...... 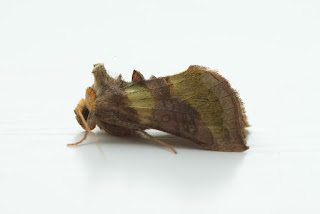 Posted by martinf at 7:26 PM No comments:

Last week, work took me to the Canadian Rockies in Alberta. And whilst there wasn't too much time for natural history I did manage a few bits and bobs.

A security light left on each night attracted a variety of moths, including the North American version of Eyed Hawkmoth, known as One-eyed Sphinx Smerinthus cerisyi. 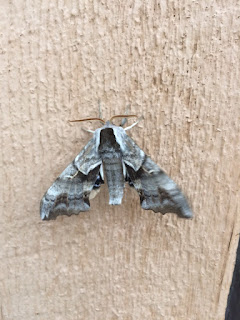 Other similar species included a Buff Arches look-alike known as Lettered Habrosyne Habrosyne scripta, (and following the rather annoying American trend where the Generic name becomes the second part of the English name.) 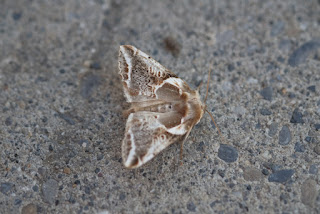 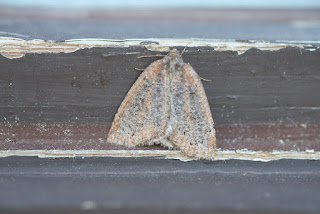 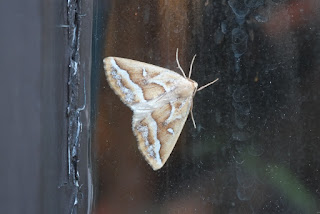 The longhorn beetle Spruce Sawyer Monochamus scutellatus was seen on a couple of occasions. Check out those antennae!! 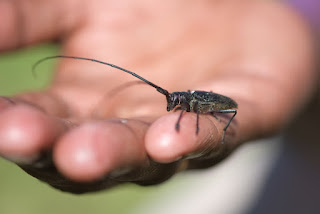 For me this year the highlights were the mammals. I saw several new species including American Pika and American Beaver. However the winner (after 5 visits in 4 years) was finally catching up with Grizzlies. Four bears seen in 30 mins. First a lone bear, swiftly followed by a mother and two cubs! 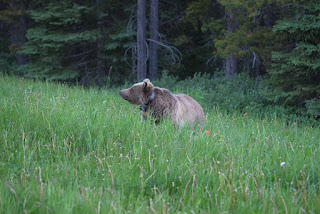 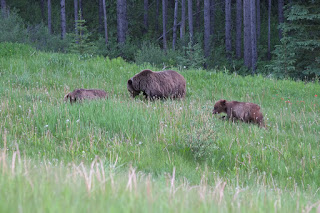 Posted by martinf at 8:37 PM No comments: