This week saw me starting a new job. Early days but I think it's going to be good with some challenges to get my teeth into. My new place of work is also surrounded by a nature reserve so I'm hoping that there will be plenty of opportunity for some impromptu natural history.

I found this harvestman on the wall outside my new office. Probably the easiest species to identify as it has a unique resting position, Dicranopalpus ramosus. Originally a Mediterranean species, this harvestman first appeared in the UK in the 1950's and has now spread northwards throughout much of the UK. 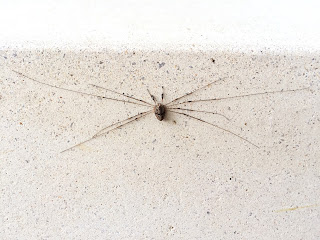 Posted by martinf at 7:29 PM No comments:

Where is the string that Theseus laid?

A tip off from Stephen Boulton on the UK beetles Facebook Group send me scuttling back up to Cavenham Heath NNR this morning. I'd seen Stephen's amazing images of Minotaur Beetle Typhaeus typhoeus and wanted to see one for myself. Whilst not an uncommon species in the southern half of the UK, it is localised, and not a species I'd seen before.

It is mainly found on heath and moorland with sandy soil and has a penchant for sheep and rabbit dung. Despite it being pretty chilly, I soon found over fifty of them going about their business in their characteristic stumbling fashion. When feeling threatened they buzz slightly which appears to be them rattling their elytra.

There appeared to be lots of burrows where they'd either just emerged from or where provisioning for breeding. 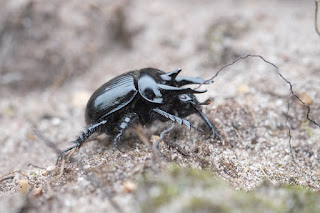 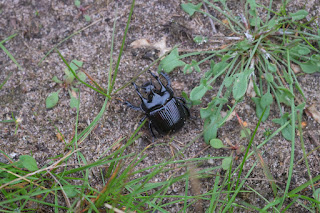 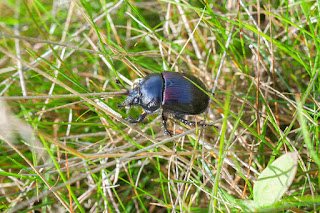 Whilst watching several move about and navigate the tussocks i noticed a smaller dor beetle that stood out because of its smooth and shiny elytra.

It appears to be a Spring Dumble Dor Trypocopris vernalis. This is a very local species and is seperated from Heath Dumble Dor T. pyrenaeus by denser punctures on the pronotum which are visible in the images below. 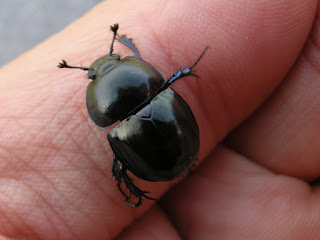 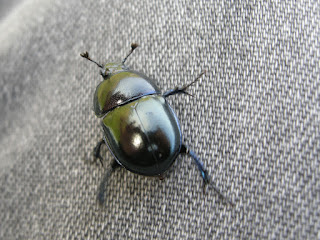 So turned out to be a two new beetle day and I even managed to buy a new car as well....

...and the title of the post?
With its link to the minotaur myth I couldn't resist stealing the line from one of the greatest groups of the late 70s/early 80s!
Posted by martinf at 2:45 PM 1 comment: