Third time lucky. Finally got my 2015 garden moth list off to a flying start last night, with my third trapping session of the year. Well I say flying, the single moth I caught was, and even that wasn't in the trap.

A single Agonopterix heracliana was the only thing doing but despite being pretty common I didn't catch it last year and so therefore is new for the garden.... 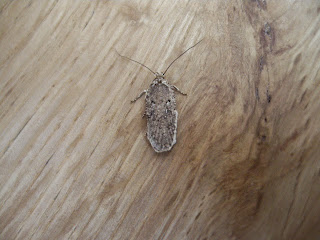 Posted by martinf at 8:44 PM No comments:

Email ThisBlogThis!Share to TwitterShare to FacebookShare to Pinterest
Labels: moths

This knowledge served me well until my mid-twenties, when I moved to Australia for work. While living there I don't think I ever knowingly saw a cranefly but people did talk about daddy longlegs in the house. Confusion abounded on my part until a kindly housemate pointed out the rather spindly arachnids making their home in various ceiling corners around the house. These were daddy longlegs.

I returned to the UK, eventually settling in Cambridge to find that these skeletal spiders were a frequent occupant of the houses I rented. I was needless to say a little confused. 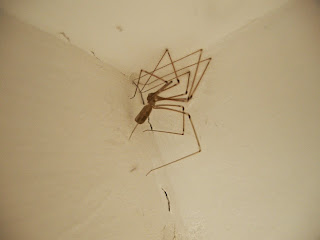 Anyway, it turns out they are Pholcus phalangioides are introduced to both the UK and Australia having been originally found in south-west Europe.  They have gradually been spreading north here over the last few decades.

They also go by the names Cellar Spider and the rather cool, Architrave Spider, and are spider predators.

There is also an urban arachnid legend that they are the most poisonous spider on the planet but their fangs are too small to pierce skin. This however is b***ocks! I do get them in the house and I think they are my 5th species of spider, so there we go.

Glad I cleared that up.

Posted by martinf at 8:22 AM No comments: