The story of the Peppered Moth is a well known tail of natural selection in action. The original 'peppered' forms are superbly camouflaged on tree bark. In the 19th century an all dark melanic mutation arose around Manchester and began to spread as it had the selective advantage of being better camouflaged on trees that were now covered in soot from all the heavy industry.

As the UK has cleaned up its act and improved air quality and reduced pollution, the frequencies of the two have changed again with the original form being more common. In fact in my lovely little semi rural garden I've never seen a melanic form at all.

This particular individual turned a couple of nights ago and gave me a surprise. The forewings appear to be melanic and the hindwings peppered. What's going on? 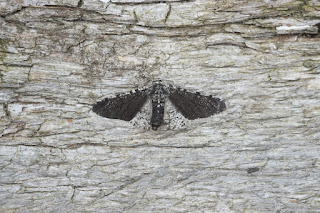 Posted by martinf at 7:26 PM No comments: