So far on my journey into beetles, there's a certain family of beetles that I've not really clicked with - the elaterids. (see what I did there?).

They look like they should be easy and they're all relatively big but there isn't really a good up to date key for UK click beetles and I find bits of what there are, really subjective. I often seem to end up going round and round in circles, exploring every divergence of the key. And more often than not just banging my head on the desk.

BUT I am slowly getting there and trying to give them a go.

So here's one that I found whilst out minding my own business on a bit of Bedfordshire heathland in May 2017. This particular individual actually flew in to me. 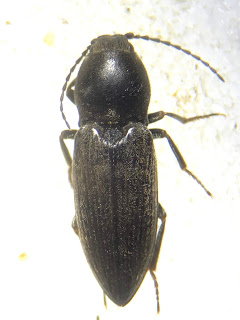 So the beetle is 8.5mm long and black with browner hairs on the pronotum and elytra. Using Mike Hackston's key the first thing to look for is whether the pronotum and prosternum are separated by a ridge. 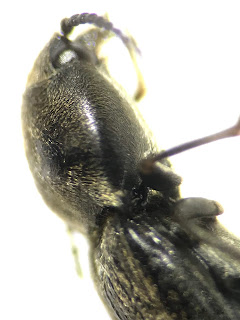 The answer is no they're not. This takes us to the subfamily Cardiophorinae and the best bit here is there are only 5 species. Result!! 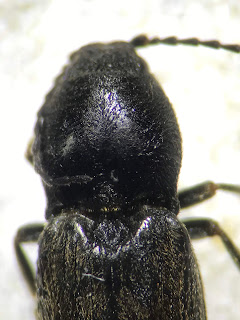 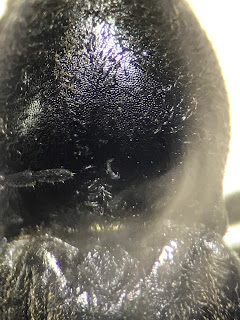 The rest of the key involves looking at the claws (long and slim) and the colour (all black), the puncturing on the pronotum (regular, fine and dense) and legs (black).

This combination gets us to Cardiophorus asellus. Job done, but..... 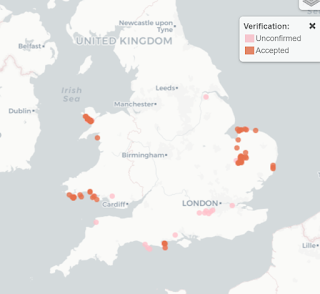 All records are either coastal or in the Brecks. Bugger, I must have made of mistake.

Luckily after putting a query on Facebook, Mark Telfer told me that none of the data from the elaterid recording scheme has been added to NBN and that C. asellus IS on the Bedfordshire list.

So I went and checked the RSPB's list for the Lodge reserve (where this was found) and discovered four previous records for the species. Phew!

Maybe clicks aren't as bad as I thought...