Breaking the back of the backlog

So I said in the last post that I'd try and do some posts to cover some of the more interesting finds from this year as I go through my various batches of samples.

First up is this staph I found. It was the only one of its type in the tube and so I decided to take a closer look. It was taken in the Suffolk Brecks and when I pootered it from a tray of suction sample, I assumed it would be a Xantholinus, it had that small and sinuous look to it. It came from an area where the dry heath was transitioning into a more damp area before becoming a reedy pond edge.

A quick look and it was obvious that it didn't have the overlapping elytra and given size, tarsal shape and the fact that it has lines of six punctures on the pronotum, this was a species of Gabrius. 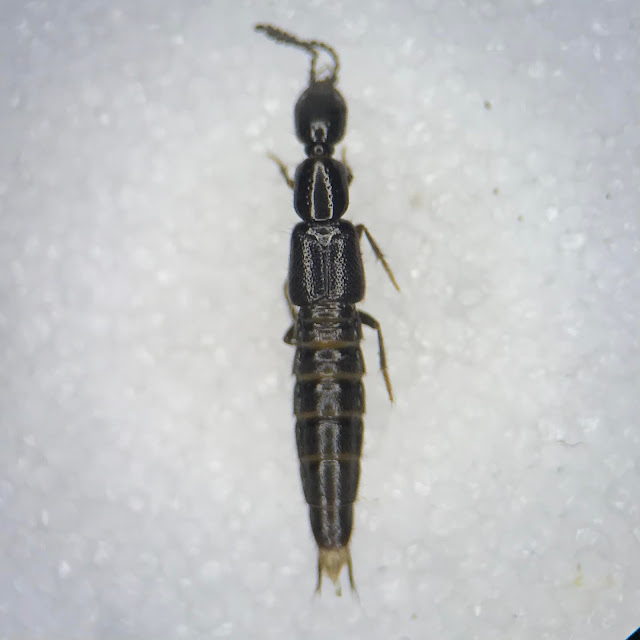 There are 12 species of Gabrius recorded in the UK and are initially split on the number of dorsal punctures on the pronotum. Five or six.

This has six and with it being less than 5.5mm in length leaves us with 8 species (having removed astutoides, exiguus, osseticus and splendidulus).

The next bits in the key all relate to the aedeagus and luckily this individual was a male so I whipped it out and had a look down the microscope. 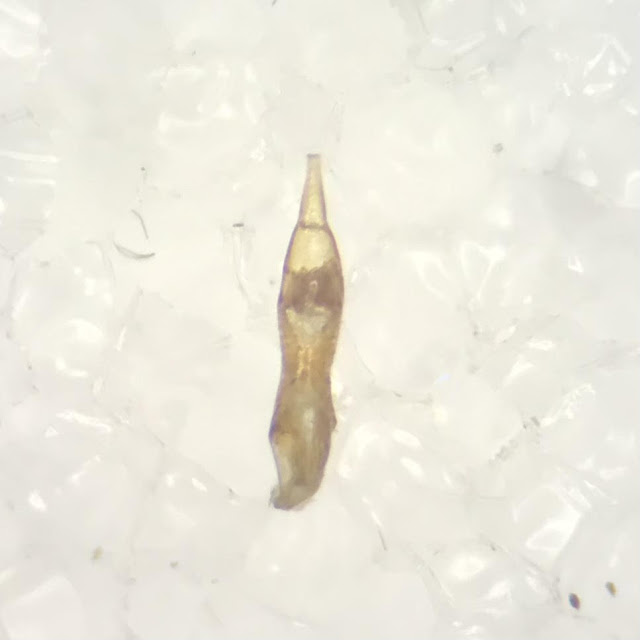 The paramere is partly visible in the above image but is bi-lobed and not rounded or emarginated. The median lobe (the main bit you can see above) is very slightly truncate at the tip and the bit that extends beyond the paramere is about equal to the length of the paramere.
This gets you to two species velox and keysianus. The narrow tip to the median lobe makes this keysianus. Brilliant, except that when i look at the text for that species in Lott and Anderson it says that this species is found on south and west coasts from Kent to Galloway on sandy pond margins by the coast. Nowhere near west Suffolk!
So I had a look on NBN and it turns out that Steve Lane found a small number of these at a site in Norfolk back in 2014 so it would seem that this species is present but probably not in too many places. This individual may well have been moving away from the pond edge towards somewhere a bit safer to hold up for the winter. A nice species to find and to add a tiny bit of knowledge to its distribution.  Also looks like this may be a first for Suffolk too.