And the animals I've trapped

I've not managed a day out beetling for a couple of months and was starting to get withdrawal symptoms. The garden compost heaps and light traps haven't been delivering much beyond the usual suspects and so the opportunity this week to visit a Breckland site in north Suffolk was too good to miss.

Wednesday was really warm and sunny and I stupidly hadn't packed any sunscreen. Who needs that in late September, I said to myself whilst packing my gear. I did have a hat which averted the worst effects but by the end of the day I certainly felt that I had overdone it on 'the rays'. 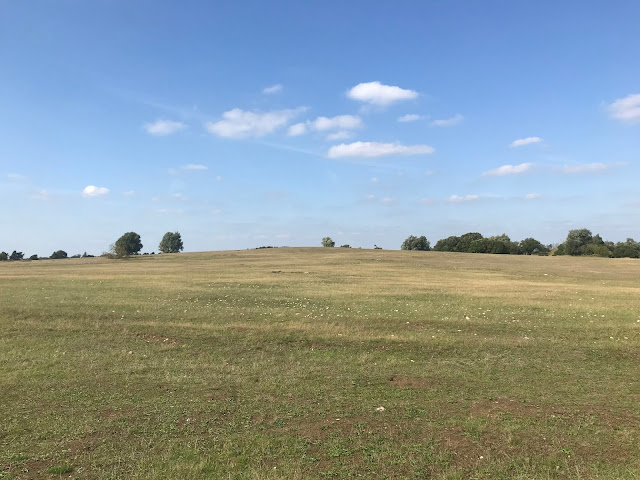 The site was a mixture of habitats. Some typical grazed and rabbit strewn Breckland heath with areas of different ages and vegetation type. The numerous large stones meant lots of crawling around on hands and knees and flipping these over in order to spy the carabids associated with this habitat. The vacuum sampler also got an outing and was employed frequently, delivering the best beetle of the day. There was also some water features, which whilst mainly steeped banked (and so less good for beetles) did have the occasional less steep, sandy margin which provided a few wetland beetles.

It was reasonably hard going at the total list won't be massive but there were numbers of ground beetles, 3 or 4 species of Calathus (need to check the melanocephalus/cinctus to be doubly sure).  Calathus ambiguus was a new species for me and I initially mis-IDd thus as C. mollis but the shape of the pronotum is different with sharper corners and a straighter hind edge. 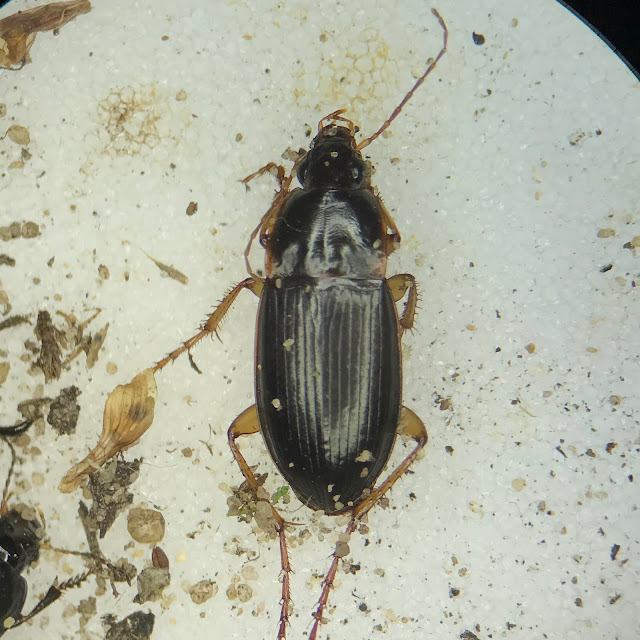 I was pleased to see the ground beetle-like tenebrioid Crypticus quisquilius again. I've only recorded this once before from a site in coastal Essex back in 2016. 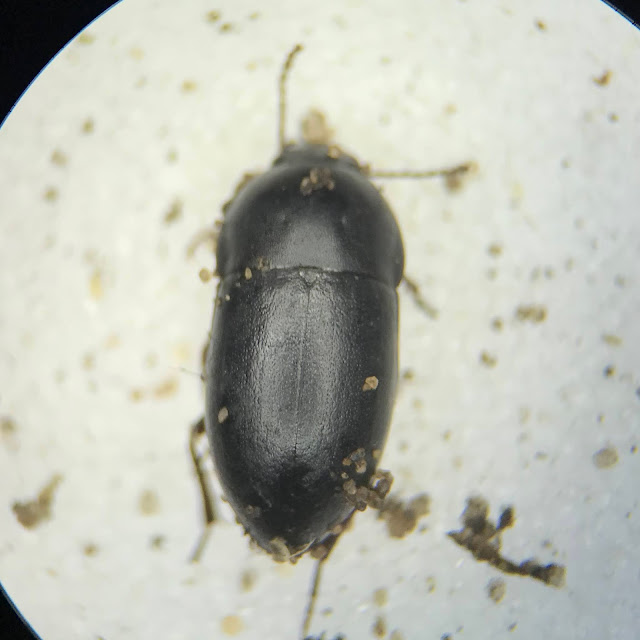 There were lots of Harpalus pumilus hiding under the stones in areas with more bare ground and less developed vegetation. I must have found 15-20 of these during the course of the day, easily identified in the field on their small size and pale appendages. 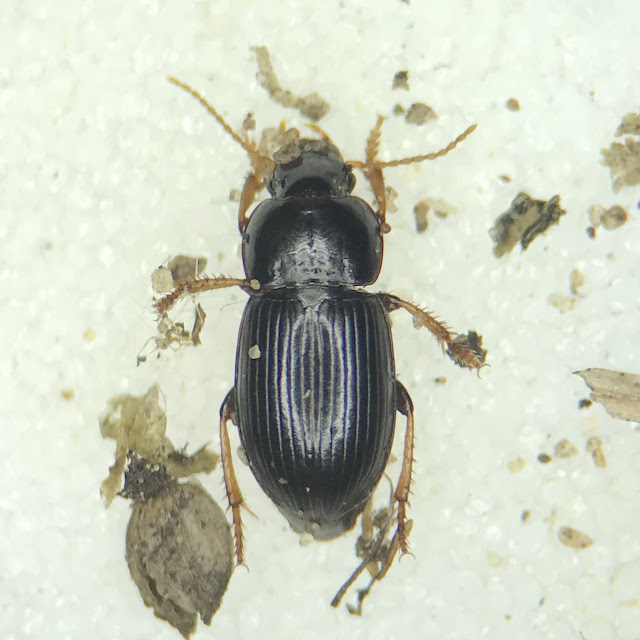 Another new species for me was the weevil Trachyphloeus scabriculus a rather scrutty looking thing with bent antenna and spatula-like erect scales on the elytra. Not hugely common but locally common in the Brecks and found at the base of plants. 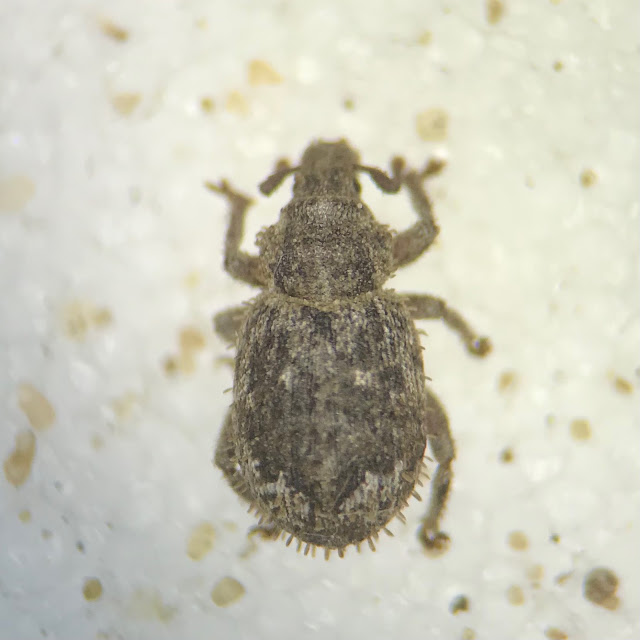 The aforementioned sandy water margins yielded around ten individuals of the weird carabid Omophron limbatus after a bit of liberal water splashing. Only the second time I've encountered this species after first seeing them in Norfolk earlier in the year. 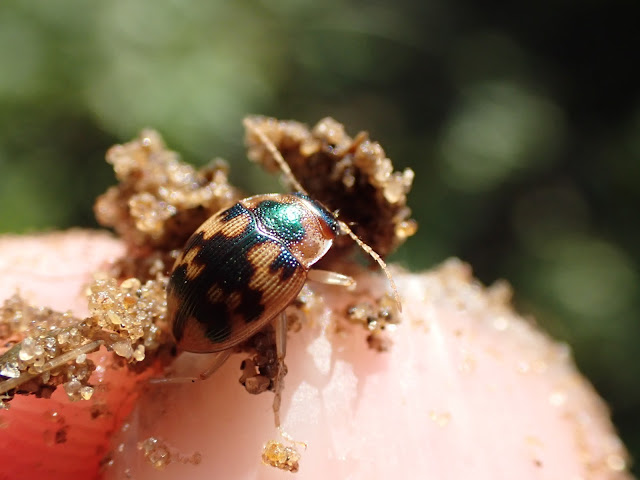 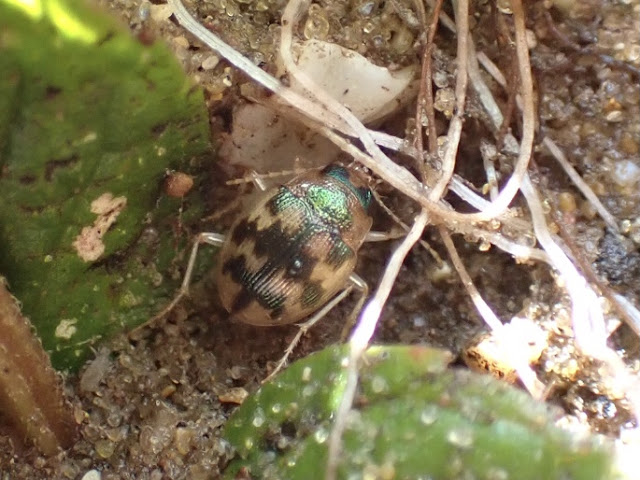 However, the best beetle of the day was found in a suction sample from assorted low lying Breckland plants. When I saw it crawling around the tray I was confused, as it looked similar to an Agrilus jewel-beetle but was really tiny. My memory said that the small buprestids, like Trachys were more rounded. I had forgotten there was a genus of small ones called Aphanisticus, comprising two UK species. This one was from the more common of the two, although still pretty uncommon, A. pusillus. It apparently feeds on Black Bog-rush Schoenus nigricans, although it wasn’t  found on that here. I've only seen two other species of jewel-beetle so it was nice to finally see another. 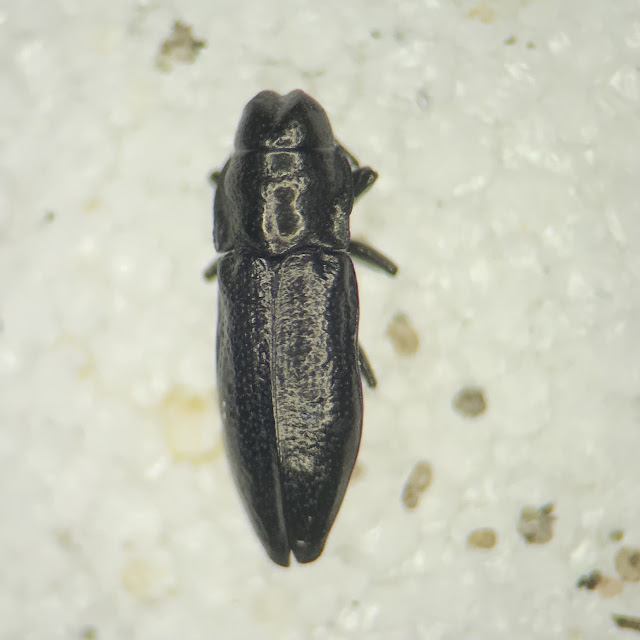 The post title link is to the final song from Nirvana's breakthrough album, Nevermind, which was released 30 years ago this week. Where has that gone? I vividly remember it coming out and someone bringing their copy into school on vinyl to play in the sixth form common room. Whilst never a huge fan, the album has stood the test of time and still gets the occasional play in the car, especially if the kids are with me...
Posted by martinf at 7:10 PM