Looking at the beetles from Panshanger, there was one that I had assumed would turn out to be a Mycetophagus. It was beaten from Oak and at 6.5mm looked like one of the hairy fungus beetles. 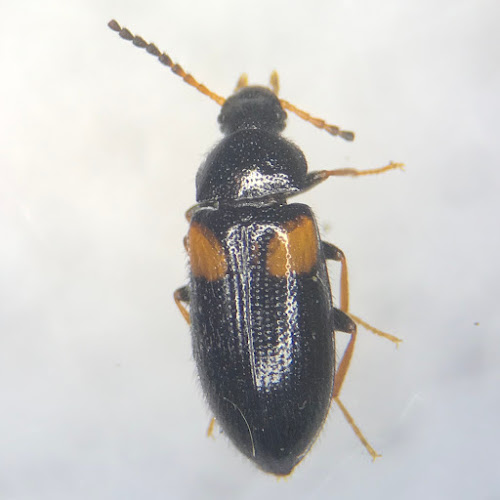 On closer inspection it obviously wasn't one but I couldn't for the life of me figure out what it was! After much head scratching, I remembered someone once saying that if you can't get a beetle to family then it's probably a tenebrioid.
Bang. Mycetochara humeralis.
This is not a regularly encountered beetle and this one turns out to be only the 3rd record for Hertfordshire (thanks, Simon). It has a UK status of Na (Nationally Scarce Grade A), which means it has been recorded in only 16-30 10km squares since 1980.  It is apparently most often found out and about at night or under bark, but it's larvae feed on rotting heartwood of deciduous trees.
Beetle of the day then 😃
Posted by martinf at 11:09 AM